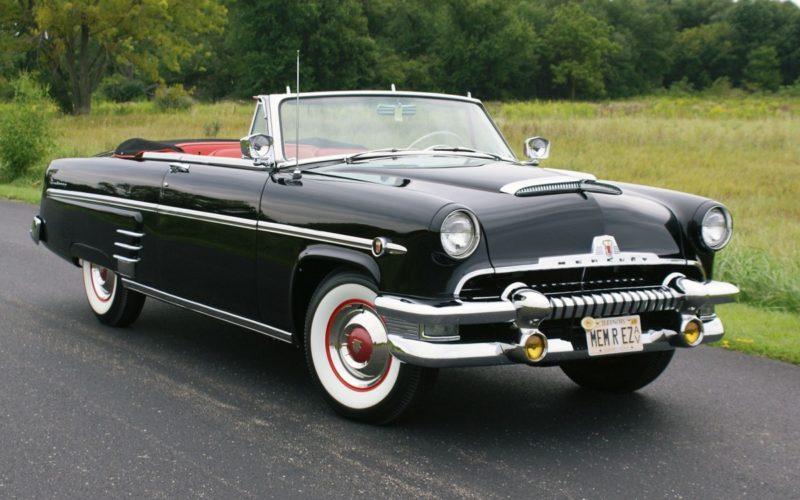 Our story starts in Wayne Michigan, June 1954.  A Mercury Monterey Convertible rolls off the assembly line and finds its way to the East Coast. Years later, in 1974 it turns up in the possession of Mr. C. W. Williams of Chesapeake, VA.  Mr. Williams owned the car for several years, preformed necessary maintenance and generally kept it in good condition. In 2002 Mr. Ron Krauss of Glassboro, NJ discovers the car for sale on the internet. He purchased the car intending to restore it.  Mr. Krauss enjoyed the car for five years but somehow never got around to restoring his prized possession. About that same time, Ken was searching for a Merc to restore.  He knew exactly what he wanted. His very first car was a ’54 Merc and he carried a picture of it in his wallet ever since he sold it in 1961.

As fate would have it, Mr. Krauss became aware of Ken’s search and contacted him.  The two hit it off immediately and in 2007 Ken became the Merc’s newest owner.  Soon after, Ken had the well preserved car shipped to Bob Kuehn in Stanton, NE.  Ken met Bob, a recognized Mercury restoration expert, during his nationwide search for the car of his youth.  Bob dismantled the car piece by piece down to the smallest screw and washer.  Bolt by bolt stitch by stitch, each piece was refurbished or replaced with NOS parts. With painstaking attention to detail and incredible craftsmanship Bob documented each step of the concours level restoration.  Two years later and free of 53 years of imperfections the ’54 convertible was now a stunning masterpiece exhibiting the quality and style that Mercury was famous for. Finished in jewel-like India Black paint with contrasting black and red leather seats trimmed with red piping it is artwork on wheels or as they were referred to back in the day, “4,000 lbs. of Pure Decadence”.

Sporting an Illinois license plate reading “MEM R EZ” the soft-top took its place in Ken’s prestigious collection. Ken has had the pleasure of displaying the car at numerous shows in the Midwest where it has amassed an impressive list of awards including the Benz award at the Geneva Concours d’Elegance and ACCA Bomgardner Award for Outstanding Restoration.

Conceived before the era of jet age fins and glittering chrome, the Merc’s timeless styling and understated luxury remain crisp and attractive even today.  Perhaps, that is part of the appeal for those who see the car for the first time as well as for those taking a walk down memory lane. Today the car occupies a stall next to its hardtop “twin”, content to finally rest on its laurels and stir the “MEM R EZ” of all who gaze longingly at its astonishing beauty.

Only 7,293 Monterey convertibles were made in 1954 and as Ron, Bob and Ken can attest, today they are very hard to find.  Finding one finished in India Black and in concours condition boarders on the impossible.  A quick image search on the internet turns up only one black 1954 Mercury Monterey convertible. On close inspection, the license plate reads “MEM R EZ”!

The Mercury marque of the Ford Motor Company was founded in 1939 with the purpose of selling entry level luxury vehicles to the upscale market between Ford-branded regular models and Lincoln-branded luxury vehicles.  The Mercury name is derived from ‘messenger of the gods' of Roman mythology. In the beginning years, Mercury was known for its performance and quality.

The Monterey model was a full-size near-luxury car introduced in 1950 and was the most expensive and luxurious vehicle in Mercury's lineup.  At the time General Motors and the Chrysler Corporation were producing a number of ‘hardtop convertibles' and Ford was determined not to stand idly by as GM and Chrysler dominated the market with their attractive new pillarless coupes.

Rather than foot the expense of developing an entirely new car Ford decided that the only solution was to customize existing two-door bodies into a new line of specialty models. These included the Ford Crestliner, Lincoln Capri and Lido, and the Mercury Monterey.  By 1952 Mercury and Lincoln came out with all-new bodies that were designed to include hardtops.

On Mercury’s 15th anniversary in 1954 the Monterey series included five different body styles, including the 2-door hardtop coupe.  As it turned out the Monterey Hardtop, was the best-selling Mercury for that model year outselling the 4-door sedan by 13,538 units with 79,553 copies going out the door followed by 7,293 Monterey convertibles. Between 2002 and 2001 only 28 Monterey’s were gaveled down at collector car auctions.  That there are not many of the type in circulation would seem to indicate that concours level restorations would be somewhat rare.

While styling features certainly accounted, to some degree for the sales success the Monterey also introduced engine and suspension upgrades which were also well received.  In 1954, Mercury introduced a new and advanced Y-block overhead-valve 256 cu in V8 engine with a two-barrel carburetor cranking out a robust 161 horsepower. The Y-block replaced the venerable flathead V8 that had been in production since 1932.  A three-speed manual was standard but overdrive and a Merc-O-Matic automatic transmission were optional.  Another important feature on the Mercury cars for 1954 was a ball joint suspension in the front, allowing for sharper handling and a better ride.  Leaf springs remained the standard for the rear suspension.

William Schmidt, responsible for the Mercury Monterey's special touches, took over the design work as well.  A choice of either fabric-and-leather or all-leather seats were offered.  A deluxe steering wheel was showcased, and bright trim edged the windows on the inside. Color-coordinated interiors also matched the external theme, while special trim and badging were used both inside and out.

The ’54 Monterey's were given new wraparound taillights and a freshened grill with larger 'bullet' bumper guards.  While Mercury and Lincoln shared many of the same design elements the Mercury was based on a Ford platform so the wheelbase was five inches shorter with a shorter overhang creating a sleek, compact, sporty look.

Mercury's flagship sedan from 1950 through 1974, the classic Monterey was considered to be “4,000 lbs. of Pure Decadence”.  Still coveted even today, the sleek lines of those earlier models make the Monterey a popular collectable classic.

The Monterey was the only Mercury to be in continuous production throughout the 1960s and was subsequently discontinued after 1974.