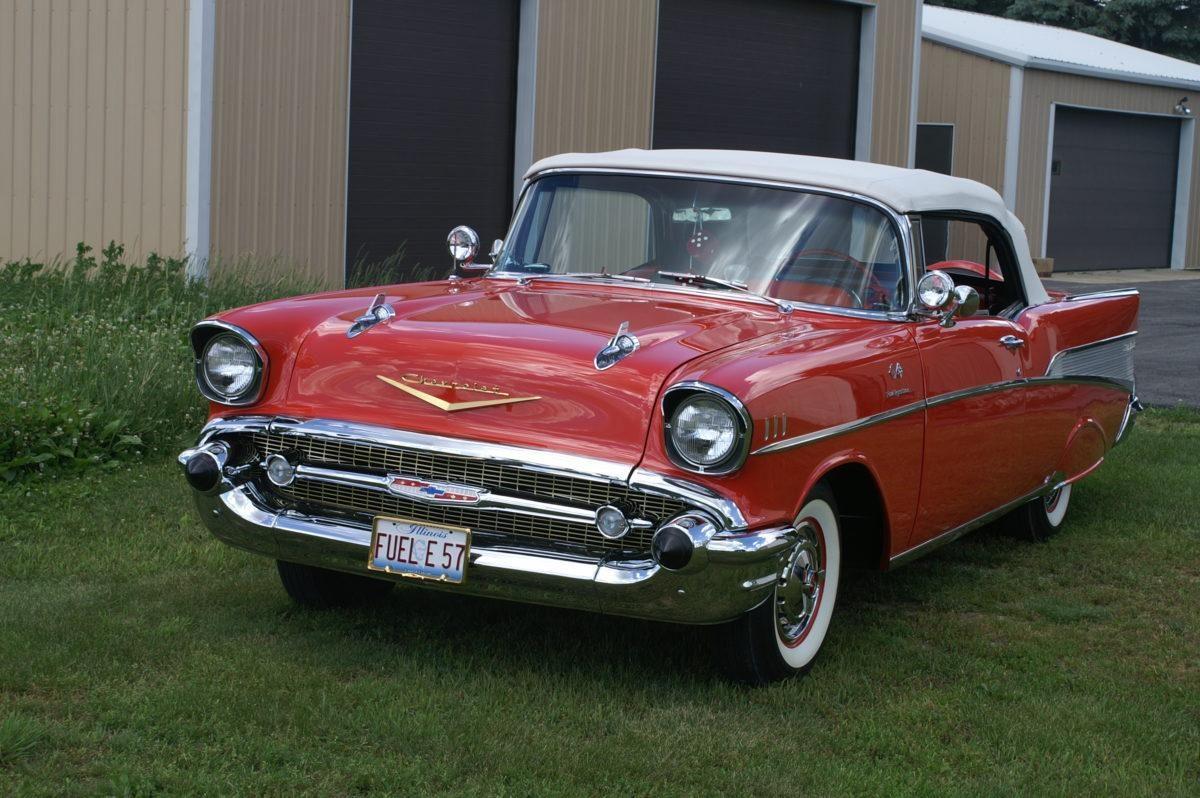 ’57 Chevys are widely considered to be among the most well known, most desirable and rare American made collector cars in existence. Just the mention of “’57” in the company of auto enthusiasts conjures up a mental image the 1957 Chevy. Chevrolet built 1,499,685 cars in 1957. 47,562 of those were convertibles, not exactly meager numbers.  Naturally, today quite a large number of the convertibles are still around.  For example, 813 convertibles made it across the collector car auction block between 2001 and 2011, to say nothing of the vehicles that traded hands privately.   Prices ranged from over $300,000 to the mid $40,000 which is to be expected as not all examples are up to concours standards.  These numbers are not exactly the definition of “rare” in the world of collector cars.  So how does a car become the rare and desirable collectable exception among cars produced in such large numbers and sold at such a wide range of selling values?  Here’s how it happens.  The car starts life as one of 47,562 basic Bel Air convertibles.  Then it is lavished with over 50 factory and dealer installed options ranging from a clever & very rare vacuum ash tray, a very rare Remington electric shaver, twin spotlights, to a radiator bug screen (cost .97¢).  Then, it is fitted with FUEL INJECTION to narrow the number down to only 68 made.  Now finish the “Fuelie” in flawless Matador Red paint; there were only 39of those.  Only 5 of the 39 Matador Red Fuelies were fitted with an automatic transmission.  So, there you have it; One of 5.   And when that One gem, exhibited here in the Ken Nagel collection, is immaculately restored to concours condition; in the world of collector cars being One of 5 qualifys as rare!

The ’57 Bel Air convertible was the showcase for Chevrolet’s styling and performance leadership. The Bel Air struck just the right chords with the public, who loved the basic car’s modern design and wide range of appearance, convenience and engine options.  What’s hard to believe is that Ford out sold Chevrolets back then by 170,000 units.

The ’57 Chevrolet Bel Air embodies the best of fifties-era American automotive styling. Its form and details are symbols of an automotive golden age. Though based on the 1955 and 1956 “shoe box” cars, on the outside the Bel Air was distinguished with more chrome and featured a golden grille set off with a heavy chrome bar that included parking lights. Riding new 14-inch rubber, Chevrolets stood 2.5 inches longer and 1.5 inches lower than previous models. Twin lance-shaped windsplits down the hood substituted for the customary hood ornament. The rear fins were capped with chrome moldings and highlighted with anodized aluminum side trim panels. The fuel-filler door was concealed in the left rear chrome fin trim, a small but convenient detail that helped clean up exterior lines.

The Bel Air was called by some a “baby Cadillac” partly because of the cost and partly because of the many similar styling cues to the Cadillac’s of the time.  A basic Bel Air convertible started out at $ 2,511.  But after loading it up with an endless list of “must have” options the out the door cost soared to $ 4,142, just $ 555 less than a Cadillac.  Among the styling features Chevy copied was Cadillac’s method of exiting the exhaust thru openings in the rear bumper.  That feature, however, was abandoned because of the exhaust residue that formed on the bumper leaving the Chevy bumper with two blacked out vestigial exhaust ports.

Under the hood, Chevrolet had achieved an engineering milestone, Ed Cole worked magic developing Chevy’s small-block V8 engine. This was the first and only year Chevrolet offered a fuel-injected V-8 engine outside of the Corvette line, a feature very advanced for its day.  The Super Turbo-Fire 283, a $550 option, produced the advertised 283 horsepower (one horse­power per cubic inch) with the help of the Rochester Ramjet continuous-flow fuel injection. Chevy promoted the idea that the “Fuelie” V8 was the first engine to produce 1 hp for each cu, but the honor actually went to Chrysler several months before.  The small-block family line went on to be honored as one of the 10 Best Engines of the 20th Century by automotive magazine Ward’s Auto World.

The basic Chevrolet small-block V-8 design has remained in continuous production since its debut in 1955, longer than any other mass-produced engine in the world.  In all, over 90,000,000 small-blocks have been built in carbureted and fuel injected forms since 1955.  Production of the original small-block began with a displacement of 265 cu in (4.3 L), growing incrementally over time until reaching 400 cu in (6.6 L) in 1970. Several intermediate displacements appeared over the years, such as the 283 cu in (4.6 L) that was available with mechanical fuel injection, the 327 cu in (5.4 L) (5.3L), as well as the numerous 350 cu in (5.7 L) versions. Introduced as a performance engine in 1967, the 350 went on to be employed in both high- and low-output variants across the entire Chevrolet product line.  Finally superseded by GM’s Generation II LT and Generation III LS V8s in the 1990s and discontinued in 2003, the engine is still made by a GM subsidiary in Mexico as an aftermarket replacement.

Not until years later was the ’57 recognized by many as the sharpest Chevy of the decade, the best looking of the 1955-57 “classic” era, if not the make’s full life span, and as an engineering marvel as well.  The 1957 Chevy V8 together with fuel injection without a doubt had a special kind of magic. The beginning of the US motorsports heritage owes its start to the 1957 Chevy convertible.

It just doesn’t get any better than a pristine and exceptionally rare ’57 “Fuelie” convertible.

Serial Numbers were stamped on a plate on the left front door hinge pillar. The Fisher Body number plate on the right-hand side of the cowl gives additional information such as the body style number, the production sequence number, the trim (upholstery) number code and the paint number code.