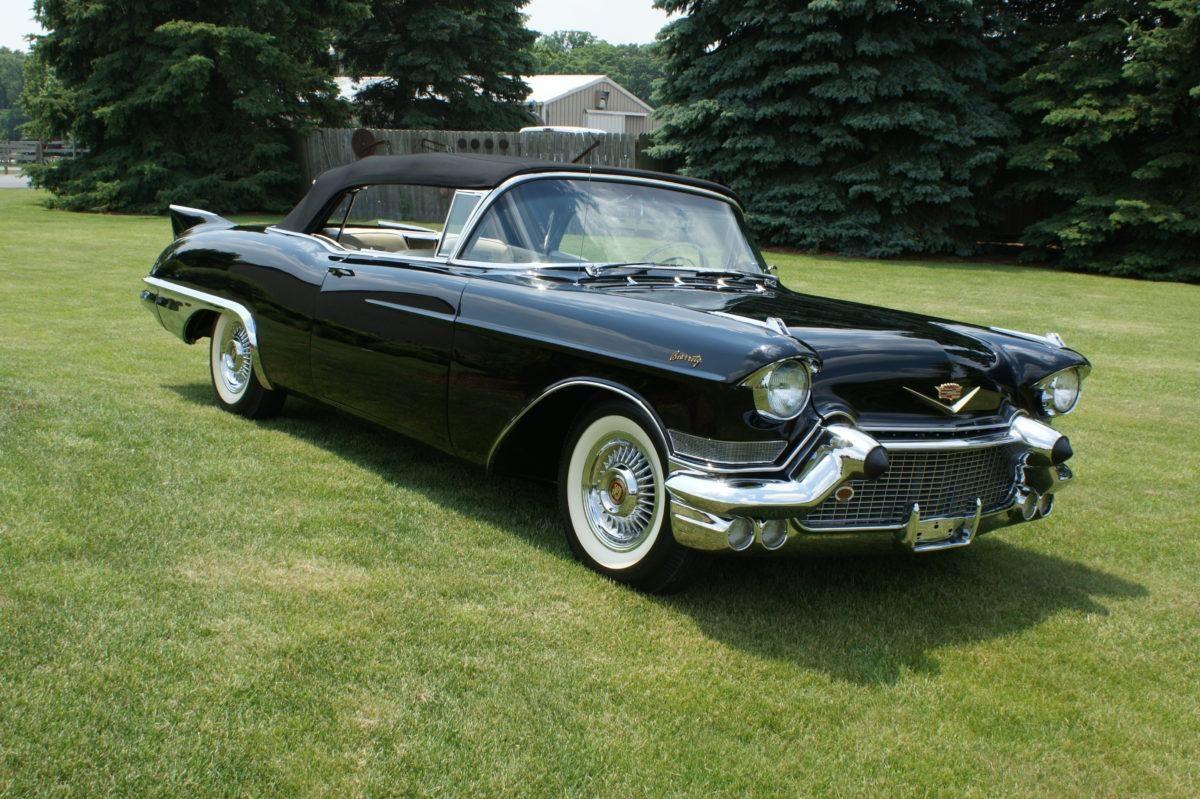 Seldom has a motor car created such intense excitement as the all-new Cadillac Eldorado Biarritz Convertible for 1957. With styling inspired by Motorama show cars, the ultra-prestigious Eldorado Biarritz oozed opulence.  From the massive shimmering chrome grille, dual winged front fender ornaments, to the American style rear fins mounted on European-look rounded fenders, commonly referred to as “chipmunk cheeks”, on to the chrome rear panels that swept from the rear wheel arches into a wraparound bumper featuring molded exhaust outlets; all seductively pulled together in stunning dramatic fashion by the rounded rear deck lid. And of course, as with all convertibles, it looked most exquisite with the top down and the parade boot in place. Even in the fantasy world of Harley Earl there was nothing like it before or since.  If reading this description out loud leaves you breathless, well that’s the condition the car was meant to leave you in.

Allegedly one of the hardest ‘50s era cars to restore because of the scarcity of parts due to the low production numbers and amount of hand work, a concours quality Biarritz is truly a sight to behold.  One of just 1,800 built and one of ONLY 50 with factory Air Conditioning, Ken’s stunning example is finished in flawless Ebony Black (110) paint, White Leather (120) interior and dazzling chrome trim.  Equipped with the very rare factory air conditioning option this car is one of a relatively few highly prized collectibles.

Innovations included an unusual tubular X-frame, without side rails. This new design gave the car greater rigidity, an increase in length and wheelbase, and allowed the body to sit 3” lower to the ground; at the expense of side impact protection.  A radically curved wraparound windshield added style.  The optional air-ride suspension system afforded a luxurious ride when it worked, which was at best sporadically.  Most buyers took a pass on this option and many of those who didn’t chose to retrofit to traditional springs lest their car take on a list, sag and drag hardly fitting the “standard of the world”.

Weighing in at 4,930 pounds the Biarritz needed massive power to haul itself around. Fittingly, the 1957 Biarritz sported the most potent V-8 engine offered by Cadillac.  The over-square, bored-out 365-cid V-8 with twin Carter four-barrel carburetors delivered 325 horsepower to the ‘Sabre Spoke’ aluminum wheels via a four speed Hydra-Matic transmission, enough power to propel the car to a luxurious 118 mph top speed.

To mark Cadillac’s Golden Anniversary in 1952 a special show car was built.  An in-house competition was held to name it.  Mary-Ann Marini, a secretary in the GM merchandising department, proposed the name “Eldorado” and won the contest. The name Eldorado, often associated with the fabled “Lost City of Gold” from the days of the Spanish Conquistadors, is derived from the Spanish words “el dorado”, which translates in English to “the golden one”.  A fitting name for the ’57 Eldorado Biarritz if there ever was one.

Cadillac stood for quality, superior craftsmanship, and innovation from the beginning. The name has always been a leader in automotive innovation.  Several firsts for American autos can be attributed to Cadillac included among them are:

Cadillac was actually a spin off of the Henry Ford Company, Mr. Ford’s second failed try at manufacturing automobiles. In 1902 an engineer named Henry Leland was brought in by Ford’s financial backers to appraise the value of the equipment, plant and inventory prior to selling if off. But Leland persuaded them to continue the business rather than liquidate it.  Leland renamed the company Cadillac after his ancestor who founded Detroit in 1701, French explorer and nobleman Antoine de la Mothe, sieur de Cadillac.

In August 1902, the Cadillac Automobile Company was created, and Leland introduced the first Cadillac at the 1903 New York Auto Show, where it was a sensation. In that week, he sold over 2286 cars for $850 each. Total Cadillac production was 2497 cars in 1903, which was truly remarkable for the time. Leland used the body that Ford had designed before he left the company and combined it with the Oldsmobile engine of his own design. Henry Ford started another company in 1903 that was finally successful, and he used the body that he designed earlier, with his own engine. So the first Cadillac and first Ford models looked exactly alike. The engine was the main difference!

Cadillac started up scaling its automobiles in 1905 by adding a four cylinder model (prior to this, engines were one cylinder, producing 10/6.5 HP). In 1907 Cadillac started using Johanssen gauges to create precise measurements for parts manufacturing. This helped them win the Thomas Dewar Trophy in 1908, which was awarded for leading automobile industry innovations. Interchangeable parts helped Cadillac win the award. Three different Cadillac’s were taken apart piece by piece, the pieces all mixed together, and then the three cars were rebuilt. All three cars drove away perfectly. Prior to this innovation cars were generally built one by one.  Each car had slightly unique parts and many parts had to be modified to work in each model. With precise engineering and measurements, the parts became interchangeable.

GM lacked a luxury model line and wanted a product for every type of car buyer.  GM became interested in Cadillac because of its high standards of engineering and quality. In 1908 William C. Durant, founder of GM, offered Leland 3 million dollars for Cadillac. Leland held out for 3.5 million, and after having a successful sales year in 1909, Leland upped the price to 4.5 million. Durant accepted the offer and paid in cash from profits he made from Buick (Durant also bought Olds Motor Works in 1908 with cash he earned from Buick). Durant kept Leland in charge at Cadillac until 1917. Leland eventually created Lincoln Motor Works, which eventually became Cadillac’s biggest competitor and ultimately a part of the Henry Ford Company! But, that’s a story for another day.