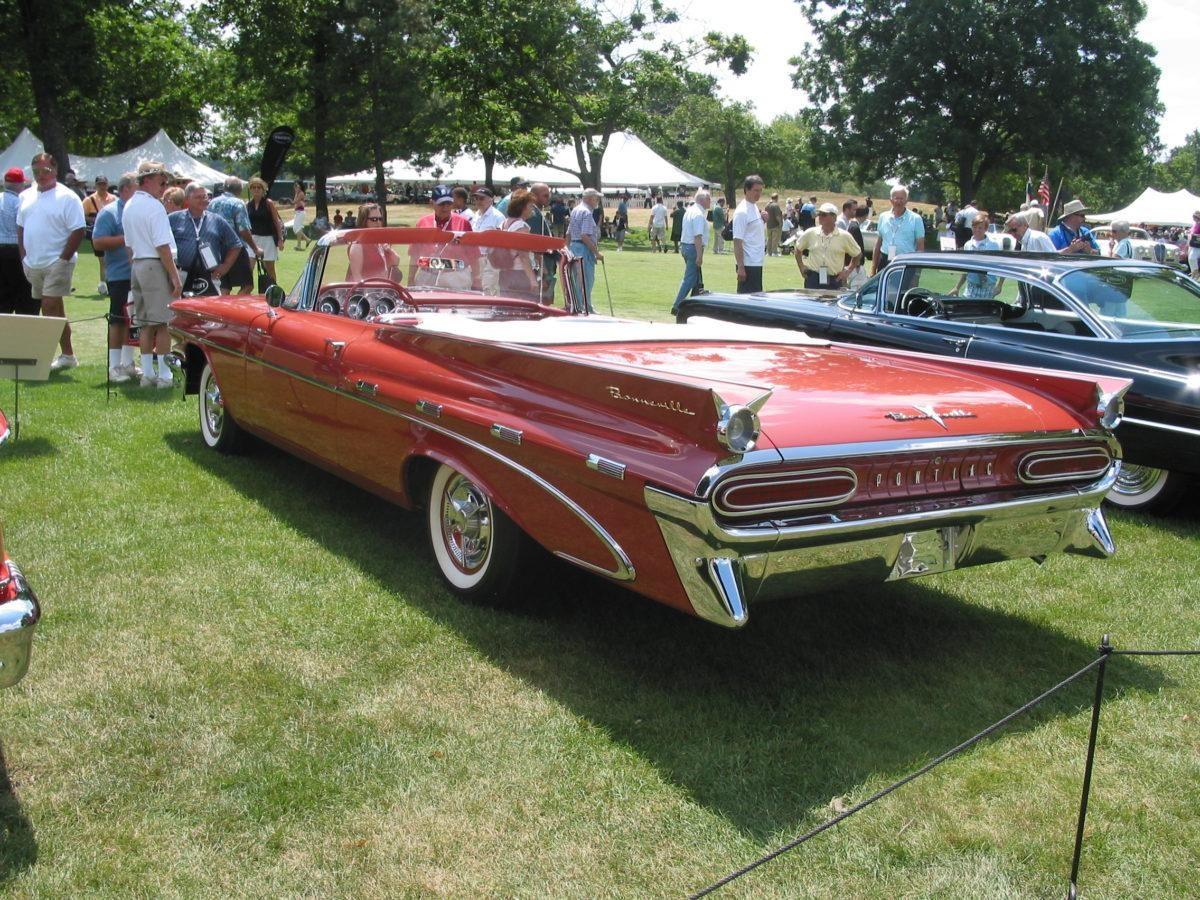 “The numbers matching concours quality Bonneville on display in Ken’s collection is not only a very rare and highly sought after original rare “bucket seat” car, it is arguably the highest quality, most authentic and most decorated restored 1959 Bonneville convertible in existence today”.  Restoration complete by Level One Restorations, Gary Riley, Arvada Colorado for Mike Frey.  With less than 50 test miles since restoration it looks like it just rolled off the assembly line at the Pontiac, MI plant, in late May of 1959.  The underside is just as Jewel Like as the inside.

The known history of this car starts in 2004 when the car was purchased largely intact by Mike Frey from a dealer in the Phoenix area.

During the 15 month restoration, every part, bolt, nut, washer and screw was removed, cleaned, restored and/or replaced with mint original or new old stock (NOS) parts.  The original inspector paint marks on the chassis were photographed during disassembly and reproduced during restoration, as were firewall markings and stamps, using as a “benchmark” car a ‘59 Star Chief with only 1,656 original miles.  It took three donor cars to supply original sheet metal and parts to complete the project.

All of the engine and chassis parts with date codes were checked in the disassembly process and all parts contained authentic date codes consistent with the car’s assembly date in late May 1959.  This is a true matching numbers original bucket seat car in its original factory Sunset Glow color with the exception of the Tri Power set up replacing the original 4 bbl carburetor.

This fabulous Bonneville Convertible is resplendent in its original color of Sunset Glow. Perhaps the most stunning feature, however, is the interior.  In 2009 the prestigious Meadow Brook Concours d’Elegance distinguished the car by naming it the recipient of the Most Outstanding Interior award. The immaculately restored tri-color “Jeweltone” Maroon and Ivory leather interior accented with Mahogany Morrokide and original style “sparkle” metallic carpet defies description and truly must be seen to be appreciated.  This vintage carpet is no longer available to the restoration community.

Of the 383,320 Pontiacs built for 1959, exactly 3,096 were Bonneville convertibles.  For whatever reason, perhaps because so many of them were produced, at first, they didn’t attract the attention of the restoration and collection community.  When collectors and restorers finally began to appreciate the significance of the ’59 Bonneville for its elegant looks and place in automotive history the cars were mysteriously hard to find. An informal survey of 10,000 members of the Pontiac Oakland Club International revealed that only 160 members owned a ’59 Bonneville and of those less than 40 owned a ’59 Bonneville Convertible. From 2001 to 2011 only 21 Bonneville convertibles were sold at collector auctions. Some speculate that because of the high production numbers they simply got lost in the shuffle and many ended up in scrap yards.  That along with the diminished survivability of convertibles in general due to severe weathering, today the cars are rare and highly sought after.  Weighing in at 4,233 lbs, stretching 18.3 ft. in length and being 6.66 feet wide it’s a good guess that these cars sat outside most of the time.  According to the Pontiac Registry 3,096 2-Door 1959 Bonneville Convertibles were made. It is estimated that less than 40 cars still exist. (survey of POIC members).

For much of the 1950s, Pontiac was the weakest link at GM. The brand's reputation for conservatism didn't jibe with postwar America's craving for glitz, glamour, and speed. Semon E. "Bunkie" Knudsen V.P. & General Manager of Pontiac Division knew that Pontiac couldn't justify its existence as merely a nicer Chevrolet. Buick had already carved out a niche as the luxurious brand of choice among doctors; Oldsmobiles were renowned for their sophistication.  Knudsen decided Pontiacs would be sporty. He assembled a team of hard-core auto enthusiasts, from a young John De Lorean, who he hired away from Packard to be his assistant on the engineering side to ad man and drag racer Jim Wangers. Then, he added a new top-of-the-line model, the Bonneville, to attract younger buyers.  In defiance of an auto-industry gentlemen's agreement banning racing, Knudsen committed to factory-backed NASCAR and NHRA teams, which soon enjoyed huge success thanks largely to the Pontiac’s newly developed V-8.

The all-new sheet metal for ‘59, developed under the auspices of design chief Bill Mitchell, was the polar opposite of the baroque designs coming out of Chevrolet and Cadillac, with clean, sweeping lines and for the first time, a split grille featuring an arrowhead hood ornament. Although all Pontiacs received the new styling, the most significant in terms of promoting the marque's fast-living image was the Bonneville.  Knudsen loved the new look on prototype cars except for one flaw: the extremely broad body drooped awkwardly over the 1958-spec chassis. To remedy this fault, he directed that the wheels be pushed out 5 inches for a more aggressive look. While this improved ride and handling, "Quite frankly, it was done as a styling move," admits Wangers. Nevertheless, the new car's 64-inch track - the widest in the industry at the time - provided the perfect hook with which to sell Pontiac's new performance image. Wangers and his team promoted the added handling, comfort, and security offered by Pontiac's new "Wide-Track" lineup to the buying public. It worked.

The dramatically restyled Pontiac Bonneville was one of 1959's biggest hits. The iconic Pontiac split grille design, 'Wide-Track’ stance and legendary 389 V-8 were all introduced in 1959. Motor Trend Magazine awarded this trendsetting Pontiac its ‘Car of the Year' trophy. The '59 Bonneville's formula was simple; stunning style plus ample V-8 power and clever marketing equals sales. Sales for '59 increased by a remarkable 76 percent (to 383,320 units), and the once-stodgy brand caught the attention of America's budding youth culture.

Pontiac would follow this simple method with wild success throughout the '60s and '70s before GM's finance and sales-oriented brand managers - Wangers calls them "little boys in men's suits" - interfered and slowly but surely steered the brand to its death.

Sadly, after 107 years in business, the last Pontiac rolled of the GM assembly lines in 2009. The Bonneville nameplate itself also departed in 2009, ending one of the longest uninterrupted runs in American automobile history. Ironically, Pontiac could have met an earlier end 50 years ago and never have even lived to see its glory days, if not for the efforts of one man, Semon E. "Bunkie" Knudsen, and the success of one car, the 1959 Pontiac Bonneville.

The quality and authenticity of its restoration is reflected in the following awards:

Featured in the December 2007 issue of Muscle Car Enthusiast magazine