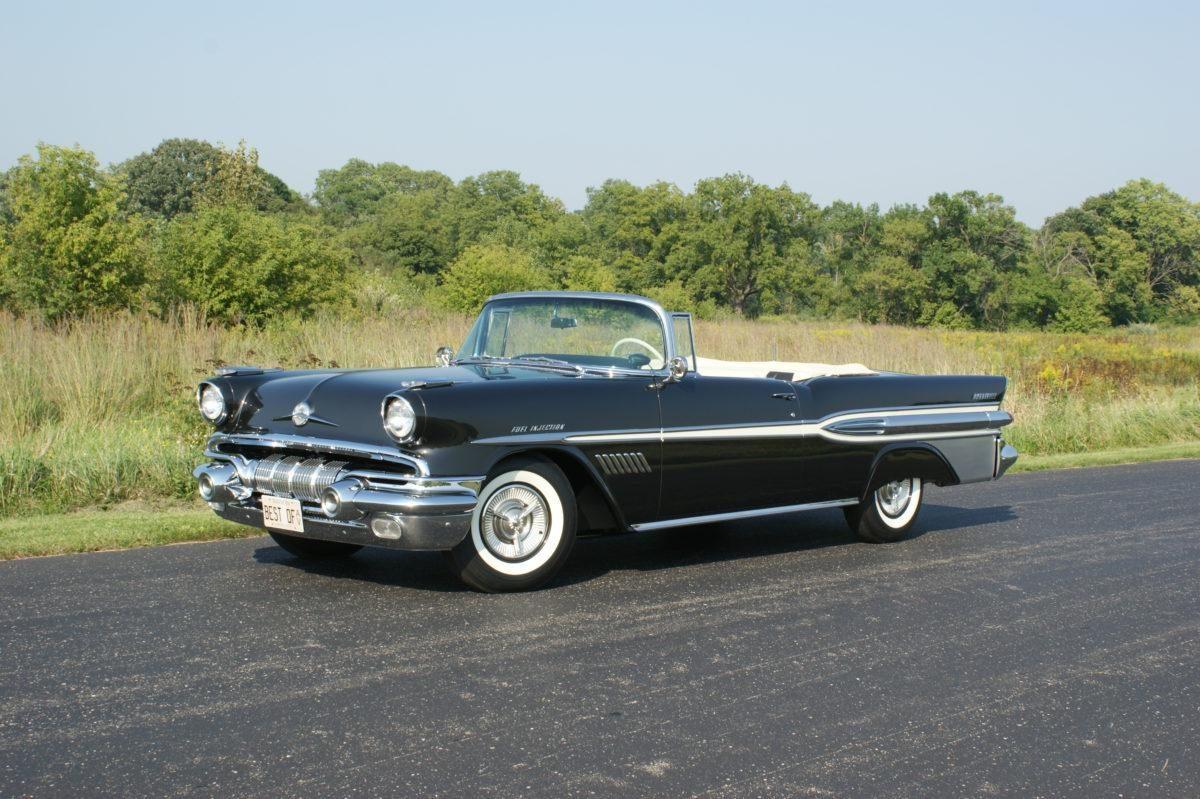 Pontiac built 630 Bonneville Convertibles for ’57, one for each of its 630 dealers. Every car was fitted with a Rochester fuel injection system and all but 12 of the cars were painted Kenya Ivory (white) with either red or blue trim.  8 cars were finished in charcoal grey with matching leather interiors accented in white.  Only 3 of the 8 are known to exist today.

The car on display in Ken’s distinguished collection is 1 of the 3.  A true automotive icon of the 1950s, this fuel-injected Bonneville is also one of the rarest Pontiacs ever made. It is not an overstatement to say that the remarkable presentation of Ken’s car places it among the finest examples, if not the finest, of these most rare and desirable Pontiacs. While the “Bonnie” was all about style and performance it was not lacking in luxury as revealed by the Remington electric shaver in Ken’s car.

Obsessively restored by Dick Hoyt of Canoga Park, a respected ’57 Bonneville specialist and the authority on ‘57’s, the level of restoration is jewel like in appearance and astounding in its attention to detail. Hoyt at one time owned three 1957 limited-production fuel-injected Bonneville convertibles.  Of the original 630 cars produced, he estimated only 50 are still in existence.  Everything has been restored to showroom condition. Even the original inspection marks on the firewall have been carefully re-created on this numbers matching show piece.

Unlike in today’s world of rapid prototyping and advanced technology where auto manufactures are prone to instantly create all manner of limited production and specialty cars the practice was almost unheard of in 1957 until Pontiac introduced the Bonneville Convertible and managed to create an instantly collectible limited production car.  The 1957 Bonneville remains one of the rarest, most desirable and collectible Pontiacs of all time. From the very beginning people who were lucky enough to obtain one of the 630 cars Pontiac produced knew they had something special. It is considered to be of particular historical significance because it was THE car that represents Pontiac’s performance legacy, which ultimately culminated in the Catalina, GTO, Firebird and Trans Am and set the stage for what Pontiac Motor Division was to eventually become; the performance division of GM.

In 1956 the Pontiac brand was in trouble and everyone at General Motors knew it.  Pontiac lagged behind the industry and other GM brands in style and performance. The make had become outdated at a time when younger buyers, mostly the GIs of World War II, were starting to be a major force in the marketplace.  All that would change when Semon “Bunkie” Knudsen became youngest general manager of a GM division.  His famous statement, “You can sell a young car to old people, but you can’t sell an old car to young people,” set the tone for Pontiac and echoed the increasing importance of the growing youth market in automotive sales. With the aid of his new heads of engineering, E. M. Estes and John DeLorean, he immediately began reworking the brand’s image.  Their mission to transform Pontiac would be wrapped up in one car, a styling and engineering masterpiece; the Bonneville.

The very first Bonneville was a spectacular, chrome-laden convertible.  When the 1957 Bonneville was introduced on January 11th of 1957, it was the fastest Pontiac ever produced.  Zero to sixty took just 8.1 seconds.  Appropriately, the car was named after the Bonneville Salt Flats in Utah, the site of much early auto racing and most of the world’s land speed record runs. The $5782 sticker price was as high at its zero to 60 was low.  For the Cadillac-like price, Bonneville buyers got a Cadillac-like level of standard equipment, including Hydra-Matic automatic transmission, power steering, power brakes, eight-way power seat, Wonderbar radio, electric antenna, under seat heater, defroster, tri-blade wheel covers, electronic eye automatic headlight dimmer, padded dash and a full leather interior. There were only two options, air conditioning and a continental kit, everything else was included.

Power was supplied in abundance by a 347 cubic-inch V8 with Rochester mechanical fuel injection pumping out 315 horsepower. (Pontiac never released a specific rating for this engine, simply stating that its output was “in excess of 300 horsepower.”) The mechanical fuel injection system was a continuous-flow unit engineered by Harold Barr and Zora Arkus-Duntov.  It is considered to be a better system than the Chevrolet version, with combined rather than separate manifold heater and pipes and better fuel meter placement. Bolted to a Hydra-Matic automatic transmission, power was delivered to a live rear axle sprung with semi-elliptic leaf springs.  Independent front suspension with coil springs and four-wheel hydraulic drum brakes gave a luxurious ride.

Styling for the Bonneville was under the direction of division chief stylist Paul Gillan.  It represented a second facelift of the design that was introduced for ’55. At the front were newly featured body-color hooded headlight rims, illuminated front fender ornaments and a bumper-grille ensemble with a series of fine vertical slots for a “waterfall” effect that was drawn up by future GM styling chief Irv Rybicki. Behind the front wheels fender hash marks added to the illusion of speed.  For the first time in a decade, Pontiac taillights were a shape other than circular; elliptical lenses fit into massive chrome bezels under fins that angled back and up.  A sculptured chrome wrap-around bumper with integrated duel exhaust outlets finished off the rear style treatment. Body sides featured rocket-silhouette chrome spear trim that ran the full length of the car and provided for two-tone paint accents.  Stylized “FUEL INJECTION” badging above the front wheel arches and centered on the trunk lid above the bumper boldly announced the level of performance to be delivered.  The equally stylized “BONNEVILLE” badging appeared above the “spears” on the rear fenders. As a side note; Like every Pontiac since 1935, the Bonneville was to have “Silver Streak” chrome bands on the hood, a styling feature the new general manager’s father, William Knudsen, had approved back when he was running the division. Bunkie saw them as reminders of the past and ordered the trim removed just weeks before the start of production.

In a day where nameless legions of designers sit in front of computers and spew out shapes like bland porridge painted in drab lifeless colors the names Earl, Knudsen & DeLorean are reminders of a Pontiac past when style stirred the emotions and powerful engines satisfied the need for speed and adventure.   In a time when you could name cars just by their shape, they were the rock stars of the auto world who gave us milestone cars like the Bonneville that would set the standard for style and performance for the next two decades.

Amid ongoing financial problems and restructuring efforts, GM announced on April 27, 2009 that after 107 remarkable years the Pontiac brand would be discontinued.