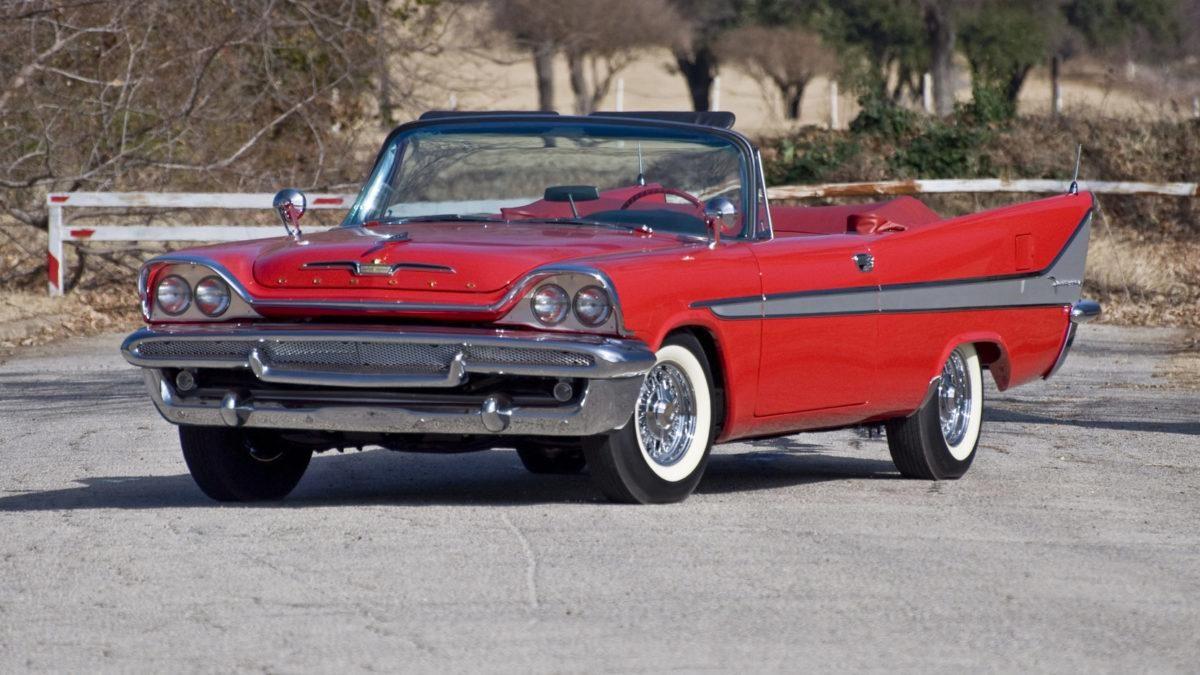 Only 700 DeSoto Firesweep convertibles were built by Chrysler in 1958, a mere 12 of which are still known to exist today, this absolutely stunning restoration is one of the 12.  Finished in flawless red paint accented by the rare Spring Edition chrome trim package many consider it to be THE one of the twelve.   Riding on a magnificent set of wire wheels fitted with period correct wide white wall tires the car looks spectacular with the top up or down.  It is truly a sight to behold that draws crowds and captivates observers transporting them, if just for a moment, back to a time when automobiles were rolling works of art.

In December of 2011 Tim Fagan one of the previous owners contacted Ken and provided him with an extensive history of the car.  The known history starts in 1966 when Alvin Krenzien of Norfolk Nebraska bought the car on a bill of sale.  The car was not much more than a rolling “barn find” covered in dust, dirt and straw.  Stripped of its engine, transmission and many other parts it was at least dry and practically rust free.  In 1982, Ernie Arteaga of New Melle Missouri bought car from Alvin and towed it home to Missouri.  He wrote on the deck lid in marker “car in tow”, put it in the garage at his home and let it sit. In 1985 William and Tim Fagan of Fort Wayne, IN rescued the car still in “barn find” condition.  Over the next 22 years Tim brought the car back to life.  In his care the car was driven extensively thought the Midwest collecting numerous awards at major DeSoto shows.  It also became a fixture around town as Tim provided it for use in parades and various public events when he wasn’t taking the family for a ride to the local ice cream shop.  Tim reluctantly put the car up for sale in 2007.   The new owner Bob Schmidt of Branson, Missouri then sold car to his friend Jess Ruffalo, a car collector from Wisconsin.  Sadly, Jess died shortly after buying car. His family carried on with the restoration and commissioned Jerry Kopeckey of Iola Wisconsin to complete the work.  In the process the original white paint was changed to the stunning red finish seen on the car today.  With restoration complete in 2008 the Ruffalo family put the car up for auction at Barrett-Jackson where it was acquired by Don Davis from Texas.  In May of 2011 Davis sent it to the Mecum auction in Indianapolis where it was acquired by Ken Nagel and became part of his exceptional collection, where it remains today.  Ken shows the car mostly in the Midwest where it has acquired a lengthy list of awards and attracts admiring crowds where ever it appears.

Several interesting touches distinguish this glorious finned Fifties example of automotive art, most notably its extremely rare Spring Edition exterior chrome trim package which includes the filler panel in the side “sweep” (as in Firesweep) and chrome stripes on either side of the rear license plate, a steering wheel-mounted Benrus self-winding watch and one of the rarest factory options offered by any manufacturer; a 162/3 rpm record player, accompanied by the original records sold by Chrysler dealers, along with a record order form.  Power comes from the original 350/280 HP “Wedge” engine, offered in DeSoto, Dodge and Plymouth models only in 1958 and mated to an optional 3-speed push-button Torqueflite transmission. Color sweep trim was standard on hardtops and convertibles. Eighty-six two-tone and 14 solid color schemes were available.  Multiple colors were used to highlight design details such as the fang-shaped panels. The windshield was DeSoto’s first wrap-around design. The interior was new and slightly radical with a dual cockpit gull wing theme.

The DeSoto was more than an exercise in design it was a unique riding experience. For the driver and passengers, the engine and road noise was practically not existent. The suspension was smooth and there was comfortable performance. It was a lot of car for the money.

It was the Jet Age. Test pilots and astronauts were flying ever higher and faster, and America was reaching for the stars.  Automotive designers infused their creations with aircraft-inspired names and styling cues, but the trademark feature from 1957 to 1961 was the tailfin, and nobody did it better than Chrysler’s Virgil Exner, whose “Forward Look” designs convinced Chrysler president Tex Colbert to adopt Exner’s daring vision. The ads said it all: “Longer, Lower, Wider.” Chrysler delivered on those promises with cars sporting massive steel wings that seemed ready to carry them into flight, and technical innovations that made them, as Chrysler also promised, “three years ahead of their time.” In fact, the new DeSoto had every appearance of being able to fly. Huge tail fins that actually aided stability at high speeds soared majestically from the rear fenders and terminated at a set of triple lens rocket launcher taillights.  For those with a vivid imagination, an illusion of jet propulsion was created by dual oval exhaust ports in the back bumper. On cold mornings, Desoto’s left convincing looking vapor trails.

The DeSoto make was founded by Walter Chrysler on August 4, 1928 and introduced for the 1929 model year. It was named after the Spanish explorer Hernando De Soto. Chrysler wanted to enter the brand in the mid-price class competition with its arch-rivals General Motors, Studebaker, and Willys-Knight.

Shortly after DeSoto was introduced, however, Chrysler completed its purchase of the Dodge Brothers Company, giving the company two mid-priced makes. Had the transaction been completed sooner, DeSoto might not have been introduced.  Despite being a successful mid-priced line for Chrysler for most of its life the De Soto marque was officially dropped November 30, 1960, with slightly over two million built since 1928.

DeSoto's failure was due to a combination of corporate mistakes, quality control and external economic factors.  It was Chrysler's own brand management in 1950s, which pitted each of the five marques (Plymouth, Dodge, DeSoto, Chrysler and Imperial) against each other that did the greatest damage to DeSoto and ultimately to the company itself.  That, along with the economic downturn in 1958, spelled doom for the DeSoto brand.

2020 – Feature in the August issue of Collectable Automobile Magazine