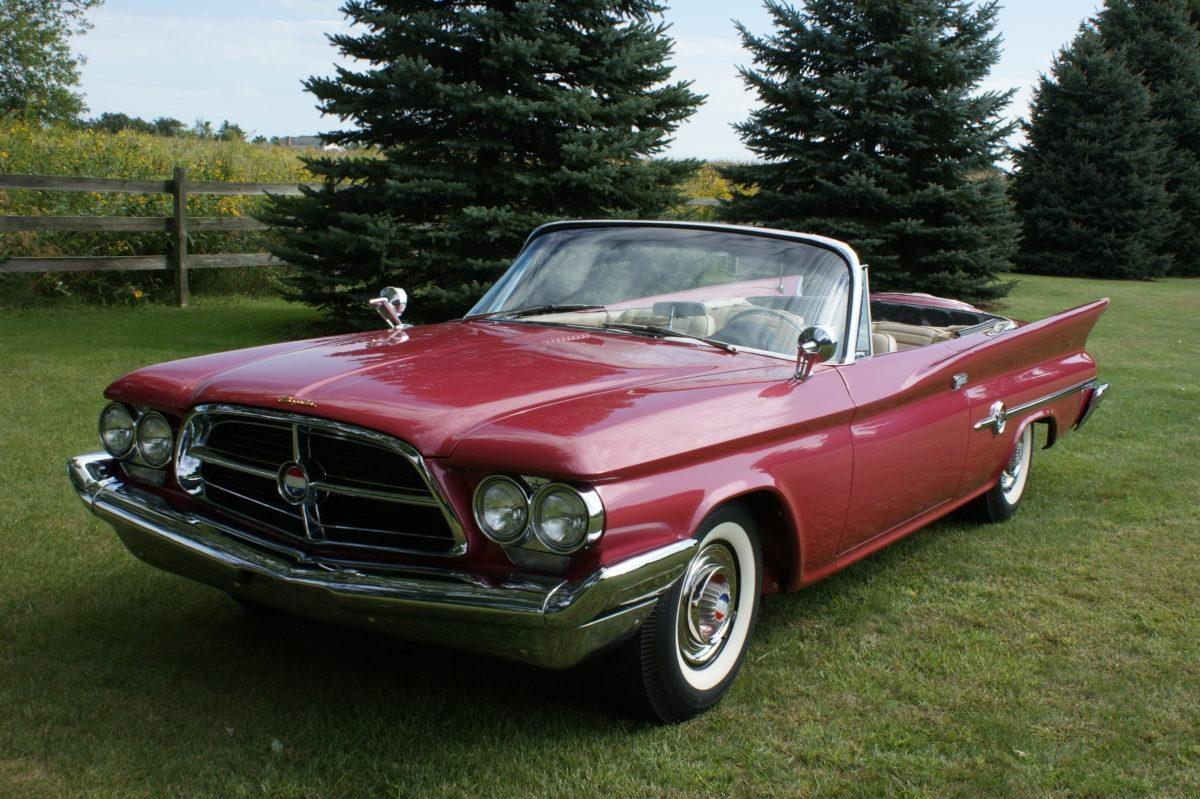 The fabulous 1960 300F convertible featured in Ken’s collection is one 80 known survivors of only 248 made that year.  Impeccably finished in stunning Toreador Red it is a very rare combination of elegant grace and incredible power.  When most cars were struggling to get to 200 HP and muscle cars were still in the future, the 300F was in a league of its own boasting the performance of a race car and the comfort of a limousine.  Estimated top speed for the mammoth 19ft. 4,450lb. 375 HP “spaceship” was an incredible 130 MPH.  Still not impressed?

As if the “cross-ram” induction system that connected two 4bbl carburetors and the four individual leather bucket seats that automatically swiveled for the driver and front passenger weren’t thrilling enough, Chrysler introduced the futuristic “AstraDome” instrument panel.  This spectacular dashboard made its debut in 1960. The name itself invoked space flight and was coined a good five years before the Houston Astrodome opened its doors and two years before the space age Jetsons appeared on TV.

The three-dimensional array of instruments was encased under a clear plastic bubble. In the background is the semicircular sweep of the 150 MPH speedometer; in the foreground are individual gauges for amperes, fuel level, oil pressure and coolant temperature.  To the left of the semicircular speedometer is a panel glittering with five pushbuttons to control the transmission; to the right is a mirror-image panel for heating, cooling and ventilation controls. Two big knurled knobs under the transmission pushbuttons control lighting and wipers, while the ignition switch and Golden Touch radio take up residence under the heating controls. Four more knobs were arrayed around the chrome band at the base of the dome, for control of map and dome lights, rear window defrosting and the power antenna.  Four more controls-for the power convertible top, mirror, Auto-Pilot speed control, and cool air vents were mounted under the panel, each in its own nacelle.

And for the finishing touch, the instruments are bathed in electroluminescent (or, as Chrysler called it, *Panelescent) blue light.  The effect was like something out of a science fiction movie.  How the driver (pilot) could keep their eyes on the road facing such a mesmerizing array of more than two dozen knobs, switches and pushbutton “spaceship like” controls bathed in an iridescent blue glow is a mystery.  There has never been anything like before or since.

The 300 series can trace its design history back to the giants of automotive styling. It started life under the direction of the talented and innovative Virgil Exner.    Before moving to Chrysler, Exner had worked for GM under the guidance of the legendary Harley Earl. Exner also worked for Raymond Loewy’s own design firm.  Raymond Loewy is known as “the father of industrial design”.  He shaped the look of America for over 50 years.  Among his works were the Greyhound bus, the Coca-Cola bottle, the Lucky Strike package, the Studebaker Avanti, Air Force One livery and NASA’s Skylab space station.  It is little wonder that the seldom seen 1960 300F convertible with its luxurious power, elegant interior and space-age exterior styling has become one of the most sought after of the Letter series cars.

The Chrysler 300 “letter series” were high-performance luxury cars built in very limited numbers by the Chrysler Corporation in the U.S. from 1955-1965.  The 300 “letter series” cars can be considered one of the muscle car‘s ancestors, though much more expensive and exclusive.  The Chrysler 300 letter-series cars were made famous by Carl Kiekhaefer, whose racing teams successfully campaigned the 1955-1956 models on the NASCAR circuit. The production cars appealed to affluent enthusiasts who wanted brute power wrapped in luxury and head-turning style.

The 1960 300F introduced a new, higher power 413 cu in (6.8 L) Wedge engine coupled to Chrysler’s 3-speed Torqueflite push-button transmission delivering 375 hp in standard form. It featured a radical “cross-ram” induction intake manifold system consisting of two pairs of 30 in long tuned pipes that crisscrossed so that each set fed the opposite side of the engine. The two 4bbl carburetors and air cleaners hung off the sides of the engine over the fender wells. These long tubes were tuned so that resonances in the column of air helped force air into the cylinders at low rpm speeds. The new induction setup gave away five horsepower to the previous year’s inboard carburetion but added 45 foot pounds of torque 800 rpm lower.

Also new were four individual, leather bucket seats with a full length console from dash to rear seatback. A beautifully finished interior continued a tradition of comfortable motoring. The interior was so inviting that the seats literally offered themselves to driver and front passenger, automatically swiveling to allow easy access whenever a door was opened.

The bodywork was also redone for 1960, using Chrysler’s new lightweight unibody construction and given sharper-edged styling with outward-tilting fins that were visually separated from sides. The “toilet seat” trunk lid contributed to a demeaning opinion of the 300F and was done away with after this one year of production.

*Developed by Sylvania for Chrysler Corporation, Panelescent Light uses a power converter mounted above the left kick panel to convert 12 volt DC power from the car battery to high voltage AC current. This AC current is fed through white-colored, insulated wires to a multi-layered phosphorescent substrate panel, (which resembles long, thin rods), within the instrument panel assembly. This layered panel glows when power is applied to it. The phosphorescent substrate panel consists of several layers, beginning with a steel plate upon which a blue phosphorescent electroluminescent layer is applied.