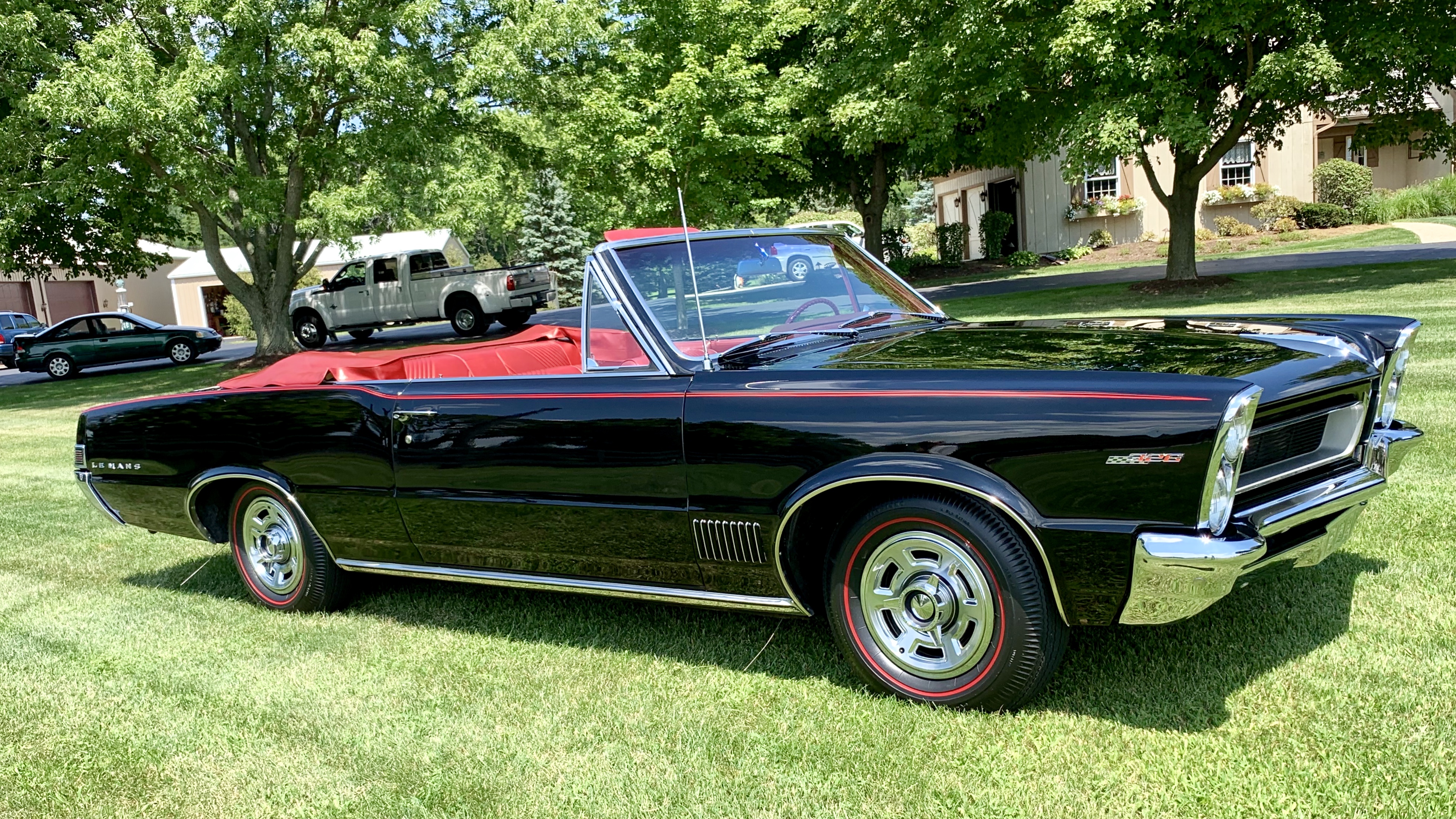 Nestled in among 28 of some of the rarest and most significant award winning cars of the ‘50’s, ‘60’s & ‘70’s is an unrestored original 1965 Starlight Black Pontiac Tempest LeMans convertible.  With a Red “Morrokide” vinyl interior and White top it is a beauty.  13,897 of them rolled off the line in ’65 so it wasn’t a particularly rare car.  Its 326 Cu In V8 with a 2 bbl. carburetor makes 250 HP hooked up to a 2-speed automatic transmission delivers lively performance but it is nothing special.

Pretty to look at, it has none of the very special qualities of the other 28. No thunderous engine, it’s not slathered in chrome with outrageous fins, no 4-speed transmission, it hasn’t been disassembled and restored to showroom condition.

What does make this car special in its own right, however, is its original unrestored condition and documentation.  When not taking the car for an occasional top down drive, the previous two owners kept it in a climate controlled storage facility.  All scheduled maintenance and repairs were duly performed and noted for 54 years and 17,173 miles.  From the clock to the radio, everything works.  The car is completely original with the following exceptions: the usual maintenance items, the tires have been replaced, a new GM radiator, hoses and clamps installed, the exhaust system is a replacement and that’s pretty much it.  The Starlight Black paint, Red “Morrokide” vinyl interior, spare tire and drivetrain and everything else are original to the car.  The photos of the exterior paint, chrome and interior don’t due the car justice.  It is more impressive in person than in the photos, which is usually the reverse with vintage cars.

While its show car stablemates in the “car barn” get exercised and serviced according to a schedule, the LeMans is intended to actually be driven regularly, with the exception of inclement weather.  It has been checked out to be a reliable everyday driver by Jay Hutchinson, who is in charge maintenance and by Jeff Baker of Jeff Baker Restorations in Yorkville, IL who is responsible for functional drivability.

The car earned a Silver Award in the unrestored class at the 2019 GTOAA nationals.    The interior presents as new with no discoloration or wear.  The engine compartment received a slight cosmetic detail; some of the production chalk marks are still visible.  The sparkling Starlight Black paint, stunning Red “Morrokide” vinyl interior and chrome are original and in first rate condition.  The only items holding the car back from achieving Gold status were a few minor items like incorrect hose clamps etc.  Jeff Baker took care of some of these slight deficiencies. The original unmolested drive train behaves like it was new.  The steering is tight, the engine is smooth and responsive.  Brakes and suspension are precise.  The transmission and rear end are without issues.  The top cycles up and down freely with the flip of the switch.  Driving the car is a pleasure.

According to records that are with the car, the first owner purchased the car from Walker Pontiac Inc. in Mt. Lebanon, PA.  The second owner who lived close by in Bethel Park, PA. bought it In 1971 with just over 6k miles and kept it for 48 years. The car spent its entire life in the Pittsburg suburbs.  Steve Brody found the car on May 24, 2019.  He entered it into the GTOAA Nationals at Lawrenceburg IN on June 25, 2019.  As fate would have it, the Le Mans was parked next to Ken’s 1970 Ram IV GTO convertible.  Having previously owned one of Steve’s masterpieces, Ken was familiar with Steve’s expertise and work with Pontiacs. After some tire kicking and conversation, they made a deal.

The trim tag indicates it was built in March of 1995 at the Pontiac assembly plant in Pontiac, MI sometime in week “F”, which would have been the 6th week of the month.  Since March did not have a 6th week, someone must have stamped the tag with an “F” instead of an “E”.  However, March of ’65 did have a 5th week which would have been indicated by an “E”.  The conclusion is that someone stamped the tag wrong.  Never the less, the car was delivered to Walker Pontiac Inc. and shortly afterward, purchased by the first owner.  Yes, all the names and dates are on the documents.

With its split grill, wide track, sharp lines and beautifully done interiors, there are enthusiasts who think the 1965 version of the A Body intermediates are the pinnacle of Pontiac styling.  A hard point to argue considering that 307,083 of them rolled into showrooms, accounting for over a third of all Pontiac sales in “1965, “The Year Of The Quick Wide-Tracks’”.

It is important to mention the enduring legacy the Tempest left on Pontiac and the competition.  The successful game plan that Pontiac used in the early 60’s to propel itself into the #3 sales position ended In January of 1963 when GM instituted a ban on racing, the backbone of their performance image. The lack of a racing program to generate sales and promote the image sent Pontiac's managers scrambling to fill the gap by putting the emphasis on street performance.

Enter enthusiasts Bill Collins, Russ Gee led by John DeLorean, abetted by Jim Wangers.  Working mostly in the shadows during the day and weekends at the race track, this cast of characters came up with a performance option package for the Tempest LeMans consisting of a big engine, beefed up suspension hyped by a large dose of advertising.  They called it the GTO.  Introduced to America in September 1963 the Wangers designed advertising plan was so successful in promoting the GTO option for the LeMans that Pontiac took 5,000 dealer orders practically before GM Corporate knew the car existed. There was no turning back now.

And that’s how the Tempest, with the help of a few maniac mechanics with a mission and a savvy promotion magician made history.

Trim Tag – Located on the firewall driver’s side