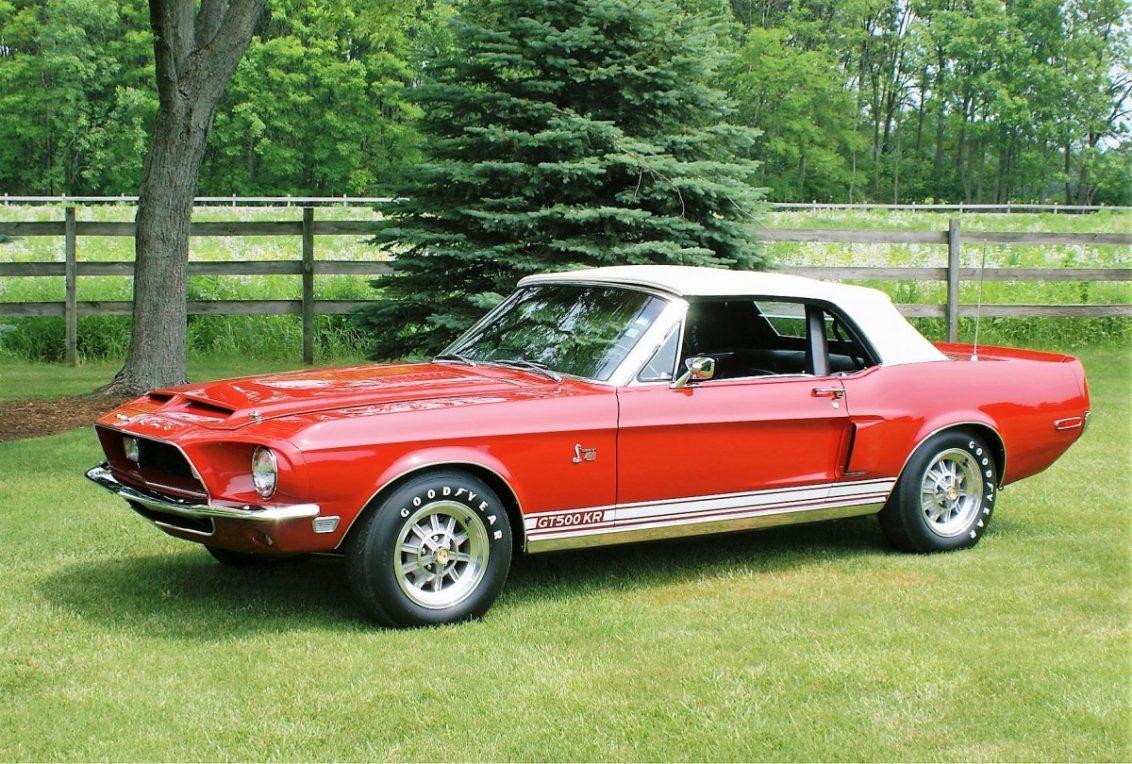 Scheduled to be built at the Ford plant in Metuchen NJ on May 21, 1968 Kens Shelby KR actually rolled off the line two days late on May 23, 1968.  After a trip to Ionia MI to get the Shelby treatment it was shipped to Jim Aikey Ford in Des Planes IL. (the dealership closed many years ago).

Ken found this flawless KR convertible in Chicago, not far from the dealership that originally sold it. He stumbled upon it while attending the World of Wheels car show at the McCormick Center in Chicago during 2007. He couldn’t put the car out of his mind and left the car show determined find the owner and make an offer to buy it. More than two years later, his plan finally came to fruition after he obtained the owner’s contact information and phoned him about purchasing the car. The owner Dennis Neva informed Ken that it was indeed for sale.  Neva had gotten the car from the original owner more than two decades earlier. In 2004 Neva started a full nut-and-bolt rotisserie restoration using N.O.S. and custom hand-fabricated parts.

Beginning with that journey from Ionia MI to Chicagoland the virtually flawless KR convertible featured in Kens collection became a rare ONE OF A KIND treasure.

Of the total GT-500 KRs produced

267 were fitted with 4-speed manual transmissions

43 were finished in Candyapple Red paint

6 came with air conditioners, all 6 were identical.

One (1) of the six was shipped to a dealer in the Midwestern United States.

THIS IS THE ONE.

The story of Kens KR convertible could very well begin with the words “once upon a time”.  A time when brute horse power, straight ahead speed and muscle ruled the roads.  This is a glimpse back to that brief 5 year moment time when a legendary racer/car builder joined with Ford to create this 1968 Shelby Cobra Jet GT 500 KR Convertible.

After serving in as a flight instructor during WW II and going bankrupt in the chicken ranching business Carroll Shelby turned to automobile racing and his Legend began.

In August 1964 Ford asked Shelby, the now famous race car driver, to develop a high-performance Mustang fastback to compete in the pony car wars.  The high water mark of this collaboration was reached with the production of the 1968 Shelby Cobra Jet GT 500 KR.  1968 was the only year the KR was produced as a convertible.  From both Shelby's and Ford's standpoint the GT500 KR represented the Mustang's ultimate evolution. The Shelby KR Mustang Legend was born.

Ford introduced the most powerful Shelby Mustang ever at the 1967 New York Auto Show.  In a way 1967 was the beginning of the end for the Shelbys, at least for the time being.

The 1968 Shelby Cobra GT500KR was a mid-year introduction, based on the 1968 Shelby GT500. Ford added 'Cobra' to the Shelby's moniker to help usher in the beginning of a new performance era at the company. The Cobra name referred to the new 428 Cobra Jet V-8 that was fitted under the KR's snake like custom fiberglass hood. It was the engine that would once again vault the Mustang to the head of the pack.

The name 'KR' meaning 'King of the Road' was a shrewd marketing move by Carroll Shelby who had learned that Chevrolet was about to unleash a marketing campaign that highlighted the 1968 Corvette as the 'King of the Road.' After a quick copyright search, they found that the 'KR' and 'King of the Road' had not been copyrighted. Stickers, photos, and decals were quickly made by Shelby and his crew and placed on the new GT500.

This was the first and only year for a Shelby KR convertible. It dressed up the stock Mustang with its unique fiberglass nose panels, fiberglass hood with working scoops, air-extraction vents, decorative bodyside intakes, and a spoilered tail with sequential turn signals borrowed from the T-Bird.

One of the most powerful and famous Shelby Ford Mustangs of all time, the GT500 KR  is probably one of the most desirable of the breed ever and definitely one of the heavyweights of the American muscle car scene. With a massive 7L V8 engine (the GT500 KR used the new Ford Cobra Jet GT engine) the GT 500 KR embodied the essence of the American muscle car - straight-line, foot to the floor, pedal to the metal power and plenty of it. It is claimed that the 335bhp power figure quoted by Shelby was actually an understatement made to lower insurance costs and that the real power figure is closer to 400bhp. The GT 500 KR has also appeared in the movie “Gone In 60 Seconds”, where it was modified with a new, chunkier front spoiler and nitrous oxide and was affectionately known as Eleanor.

With its fat tires and suspension tweaks, the GT 500-KR out handled all but pure sports cars. But it weighed more than a Cobra Jet Mustang, and as a drag racer, it was no Hemi-hunter. To most street rivals, however, one look was all it took. "Oddly, the KR's vincibility doesn't matter," observed Car Life. "The car is so impressive, so intimidating to challengers, that there are no challengers. The KR breeds confidence bordering on arrogance."

For the 1969 model year the GT 500 received an extensive face lift, the body alone increasing in length by 4 inches (100 mm). Ford was heavily involved with design and style decisions, with Shelby having very little input.  By this time the government and insurance industry was beginning to “legislate” muscle cars out of existence.  It was all but impossible for manufactures to meet stiff safety and pollution regulations in high performance cars.  Therefore, in September 1969 Shelby terminated his agreement with Ford and The Shelby Mustang project ended and with it the end of an era of automotive history.  Production continued until the parts ran out and 286 leftover '69 models were updated to '70 specifications.

This Car Is Featured In Several Magazine Articles:

The total production run was actually 4,451.  The above statistic does not include ONE GT 500 notch back prototype that never went into full production.  (Mario)

It appears that the production numbers for the 1968 KR were revised sometime in the recent past.  The total production of the 1968 Shelby Mustang KR stands at 4,450 (less one prototype notch back that never went into production)