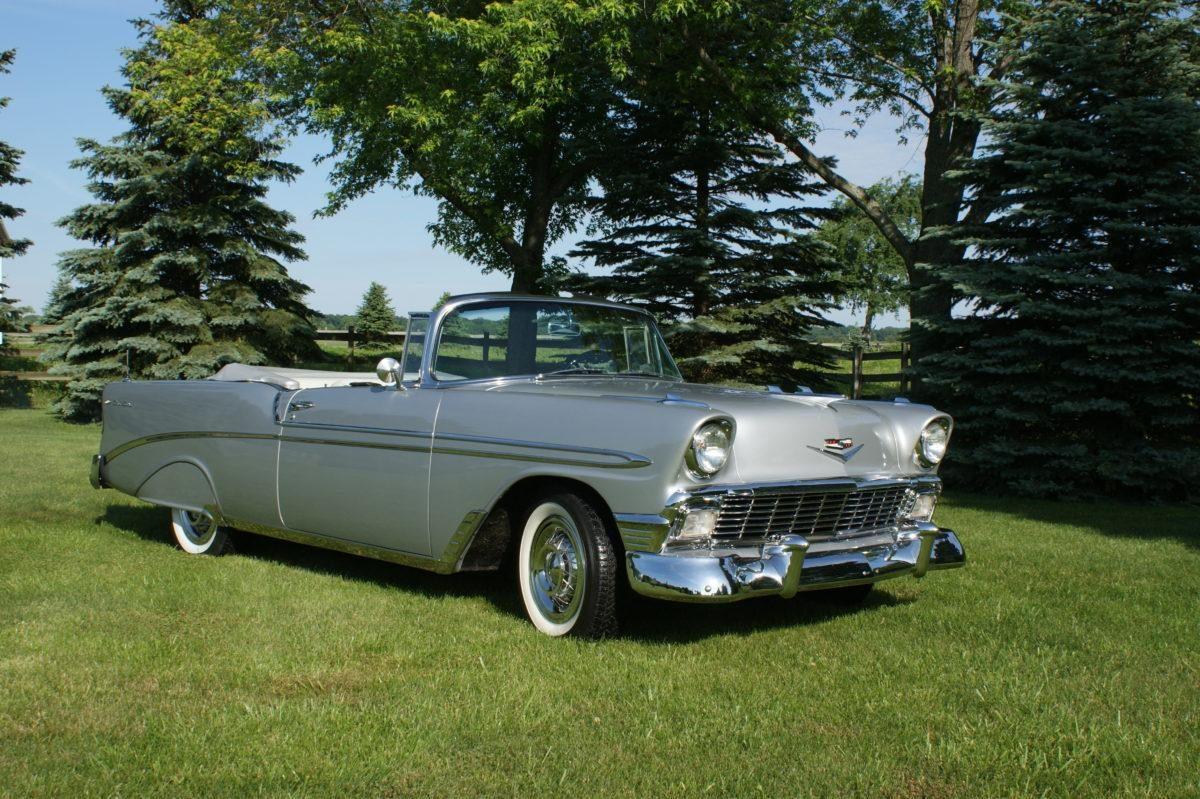 On display in the Ken Nagel collection is possibly one of the rarest 1956 Chevrolet Bel Air Convertible ever to roll of a GM assembly line.  Restored in 1993 with original reconditioned or NOS parts, it retains its original drive train and interior.

To the casual observer, this strikingly beautiful Bel Air Convertible seems to be just another remarkable restoration of one of the 41,268 treasured classics that Chevy made in ‘56.  A second look at the dazzling beauty, however, confirms that there is something unusual about this Bel Air Convertible that goes beyond the continental kit, sparkling chrome trim, gleaming wire wheel covers, exhaust extensions and all the other bells and whistles typical of a highly optioned piece of certifiable automobile art.  Closer inspection reveals what may not be readily apparent at first glance.  The paint scheme is Monotone instead of one of the 14 Tu Tone color combinations typical of the ’56 Bel Air.  More significantly, of the 41,268 Bel Air V-8 Convertibles made in 1956 this is The Only Known 1956 Bel Air Convertible Produced At The Tarrytown NY Assembly Plant Finished In A #752 Inca Silver Monotone Paint Scheme.  The 1956 Chevrolet color charts offered 10 different solid colors and 14 Tu Tone color combinations. Inca Silver was not among them!

The 1956 Chevrolet Color Codes, GM Paint Cross-Reference and the 1956 Chevrolet Master Parts and Accessories Catalog Color charts, page 1127, show that the Inca Silver paint color was not made available to the Bel Air until spring, in advance of the 1957 model year, so it did not appear as an offering on the 1956 color charts in dealer showrooms.  How did it happen to make it into the paint booth and on to this well documented car?

According to documentation and information provided by previous owners, this 1956 Chevrolet Bel Air Convertible has a story that begins at a medical convention in Tarrytown, New York. (There was a Chevy assembly plant in Tarrytown, NY that closed in 1996.  It was originally opened by the Stanley Steam Car Company in 1896.) A husband and wife, in town for the convention, visited the local Chevrolet factory with the intention of ordering a new 1956 Chevrolet Bel Air convertible.  In those days, you could actually show up at the factory and place your order.  They were aware of the of the beautiful Inca Silver color used on ’56 Corvettes.  They were told that Inca Silver would not be available until the 1957 model year for the Bel Air.  Never the less, they requested to have their 1956 car painted in solid Inca Silver without the contrasting India Ivory Tu Tone treatment.  They thought that the solid color would not show everyday road dirt and grime as much.  The problem was that the car was originally designed for a two-tone paint scheme and Inca Silver was a color destined for the 1957 model year, not 1956. As the story goes, since the 1956 model year production was near its end, the factory agreed to accommodate the unusual request.  Thus, the car they ordered became the only 1956 Chevrolet Bel Air Convertible known to exist that came direct from the Tarrytown factory with paint code 752 (Inca Silver) in solid Monotone and not in a Tu Tone scheme.

To demonstrate the unique status of this car, the factory installed the Chevrolet Gold Crest Emblems on the rear fender panels upside down. Many Chevy “experts” don’t believe it’s possible that it could be a true “from the factory” solid Inca Silver car.  That is, until they see the cowl tag and original build sheet found under the rear seat when the frame-off restoration was done!

A serial number trace revealed that the car was assembled in late August of 1956 in the last batch of 18,246 cars produced at Tarrytown.  On September 13, 1956 it was shipped to a Lynsley Chevrolet in Montclair, New Jersey and delivered to its new owner, Miriam MacMahon from Montclair.  Miriam took great pride in calling her car “Miss Daisy”, as displayed by the whimsical cartoon graphic on the left side of the trunk.  What fun Miriam must have had cruising the streets of the fashionable upscale enclave 20 miles from NY City in her sleek silver Chevy with the top down.  Only Miriam could tell us what particular attraction she had a to her Inca Silver Chevy that caused her to forgo the ultra-luxurious 1956 Mercury’s bearing the name of her hometown, we will never know.  After enjoying the car for a number of years It was sold a friend, Donald D. Paradiso from West Orange, NJ.  In 1993 the very rare car was treated to a meticulous frame-off restoration. During the restoration, the original engine and transmission were rebuilt, the body and frame reconditioned, the original interior removed cleaned and reinstalled.  According to the restorer, the 44,693 miles showing on the odometer is correct. On March 15, 1994 it was sold to Jim Gauthier of the Gauthier Auto Group Winnipeg Canada.  It was on display in his Chevrolet, Cadillac dealership showroom until it was acquired by Ken Nagel on March 22, 2013.

In 1956 Chevrolet sponsored the Dinah Shore Television show.  The advertising program featured Dinah singing the famous jingle, “See the USA in your Chevrolet”.  And, just like the advertising jingle suggested, many happy buyers took Chevrolet up on the offer by seeing the American countryside through the wraparound windshield of a two-tone (or in this case, a solid Inca Silver) ’56 Chevy Bel Air Convertible. They became one of the most recognizable 1950’s American automobiles. The second generation “shoe box” Bel Air received a minor facelift in 1956.  The “Speedline” restyling that featured distinctive Tu Tone body-side treatments extended to elegant wheel openings in both the front and rear and imparted a look of motion even when standing still. Single housings incorporated the taillight, stoplight, and backup light.  The left assembly hid the gas filler, an idea popularized by Cadillac. The 1956 Chevrolet Bel Air was the first of many Chevrolets to receive a face-lift that gave them a more conventional full-width grille, pleasing those customers who didn't favor the Ferrari-inspired  front end on the 1955 model.

Displayed at the Muscle Car And Corvette Nationals, Rosemont, IL 2013