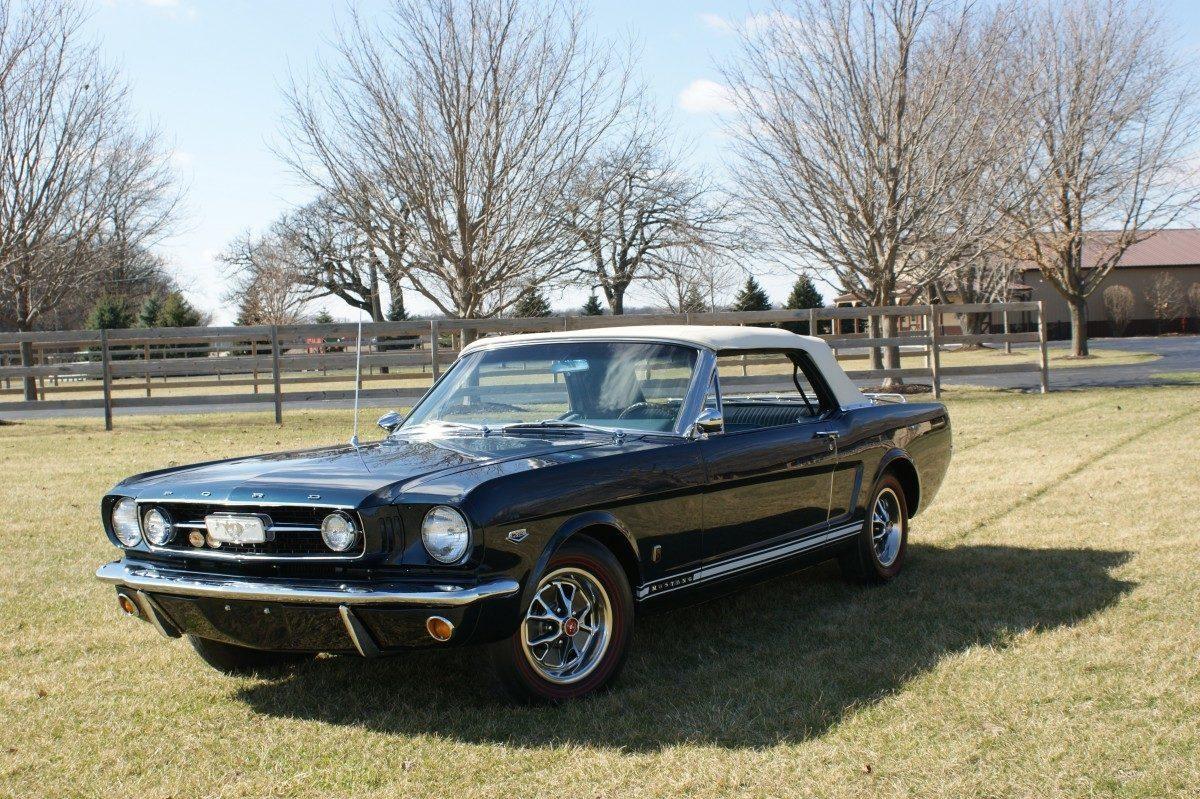 Before there were Mustangs, before there were Shelby’s, there was the Ford “Windsor” V8 engine.  Production began in 1961 for installation in the 1962 model year Ford Fairlane and Mercury Meteor. The small-block was designed as a successor to the Ford Y-block engine.  The 289 cu in version was introduced in April 1963.  Later, in the 1963 model year a special order ““HiPo”” 271 HP K-Code version was developed for the Ford Fairlane and Comet.  The compact light weight “Hi Performance”, “Windsor” engine became an option for the Mustang starting in June 1964.  At precisely that point in time the Mustang went from being a fantastic looking “secretaries” car to a true performance sports car unmatched in its all-around performance as a road going GT.

This multi-award winning Mustang GT convertible, VIN # 6R08K121925, came off the line at the Ford assembly plant in San Jose, CA on October 20, 1965. Loaded with options and fitted with a K-Code engine, it is now part of the Ken Nagel collection.

The stunning California native was restored to showroom condition in 2003 and was awarded 1st Gold Concours Award (684 of 700 pts.) by the Mustang Club of America Reno, NV.  It was part of the Tom Gerrard Collection until December, 2016 when Ken became the next caretaker.

The “High Performance 289” badging on the front fenders and “GT” emblem embossed on the gas cap are not there just for decoration. They are subtle statements about the serious performance capabilities wrapped in the sporty top down package.

Among the extensive list of options that add to the overall look are the extremely rare Luggage Rack, Illuminated Grill Pony Light and Factory Bullet Style Mirrors.

The Mustang GT K-Code Convertible on display in Ken’s collection is not only one of the finest examples in existence, is also extremely rare.  How rare?  Well, that’s another matter that will take some explaining.

What do all these numbers mean in relation to Ken’s GT?  Let’s start with the 5,469  Mustangs that were fitted with K-Code engines in 1966. **Over two thousand (6 convertibles and the rest 2+2 fastbacks) K-Codes were delivered from Ford’s San Jose assembly plant in “body in white” form to Carroll Shelby to serve as the platform for the GT350.   Bob believes that left about 2,500 K-Codes for “public” consumption in ’66.  Now, factor that since the 2+2 was better suited for competitive events and that convertibles were only about 11% of total ’66 Mustang production, it’s possible that less than 10% of the 2,500 K-Codes for public consumption were convertibles.  Following this train of thought it is easy to imagine that there were something less than 250 convertible K-Code convertibles made in ‘66.

Consider further that not all K-Codes were GT’s and not all were configured like Ken’s example, with a 4 speed and accessorized with rare options, it is not much of a stretch to conclude that Ken’s K-Code Convertible GT is exceptionally rare.  So, how many ’66 K-Code, 4-speed, GT convertibles, with all the bells and whistles were there?  How many survived and are in concours condition?  Way fewer than 250 would be a good bet.  When we researched the market, we couldn’t find any!

So, if you were wondering why you don’t see many, if any, K-Code Mustangs at local cruise nights, auctions and shows, now you know.  While it will never be known for sure what the true numbers are, it is not hard to agree that these are very rare cars prized by discriminating private collectors and those who know that these cars are not ordinary every day Mustangs but true made in America road racing GT’s.

Up until the Mustang was fitted with the 271 HP K-Code 289, performance from Detroit was measured by how fast you could go in a straight line thru the ¼ mile or just beating the competition to the next stop light. The definition changed with the introduction of the K-Code Mustang.  The “HiPo’s” Special Handling Package, dual exhausts, 9-inch rear end, 6.95 x 14 dual-red-stripe tires, upgraded clutch and drive shaft put the Mustang in the class of prohibitively expensive European GT’s that could go around corners too.  The 506 lb. 289 brought the total curb weight to only 2,770 lb. and that spelled all-around performance with a capital “P”.  All for about $3,000!

Bottom end improvements included; thicker main bearing caps, larger crankshaft damper/balancer and larger diameter rod bolts. The crankshaft was Brinell tested for hardness and made from 80% “nodular iron” as opposed to the stock cranks 40%.   Cranks were checked for correct ‘nodularity’ by polishing an area of the rear counterweight and comparing that surface using a magnification arrangement against a picture datum. For high-rpm reliability, the crankshaft counter weighting was increased to compensate for the heavier connecting rod big ends.  The increased external counter weighting at the front was split between the crankshaft damper and a supplementary counterweight placed adjacent to the front main bearing journal to reduce the ‘bending moment’ in the crankshaft at high-rpm. The “HiPo” carried SAE gross ratings of 271 HP at 6,000 rpm and 312 lb-ft at 3,400 rpm. The result was a powerful, relatively light weight, high revving engine well suited for spirited driving when installed in the light weight Mustang fitted with a competition grade handling package.  Approximately 25,000 “HiPo” engines were manufactured at Cleveland Engine Plant number #1 between March 1963 and June 1967.

Ford’s own advertising for the K-code was a direct call to “…those who will settle for nothing less than top performance…”.  The company laid out its case for the engine, stating: “Designed especially for the true sports enthusiast, this powerful V-8 provides sports car performance to match Mustang’s sports car styling. Buyers intending to enter competitive events, such as gymkhanas or rallies, will appreciate this engine’s breathtaking acceleration, over 600 feet in the first 10 seconds from a standing start.”

The “HiPo” engine was used in modified form by Carroll Shelby for the 1965, 1966,1967 Shelby GT350’s.  By using special exhaust headers, an aluminum intake manifold, and a larger carburetor, power was raised to 306 hp at 6,000 rpm. The Shelby engine had a larger oil pan with baffles to reduce oil starvation in hard cornering. Shelby also replaced the internal front press-in oil gallery plugs with a screw-in type plug to reduce chances of failure.   While filming the movie “Grand Prix” in Europe, actor James Garner used a black and gold 1966 GT350 as his personal car.  The car was also featured in the movie.  This statement was not lost on the European sports car community.  The Americans had arrived!

The K-code “HiPo” engine required a lot of hand work and engineering that made it an expensive option. Its popularity declined after the 390 and 428 big-block engines became available in the Mustang and Fairlane.  The big blocks offered similar power for far less cost but the greater weight had a negative effect on handling and performance. K-Code engines were available for installation in Mustangs for only three model years ’65 ’66 ’67.

In continuous production since model year 1965 with over 9,000,000 sold and counting the Mustang it is a legend in the automotive world.  Lee Iacocca, the driving force behind the Mustang, introduced the it at the 1964 World’s Fair.  The original pony car forged his reputation as one of the industry’s greatest salesmen ever, a visionary who could spot a market trend nobody else saw and marshal the forces of a huge company to exploit it.  The Mustang created the “pony car” class of American automobiles, affordable European looking sporty coupes with long hoods and short rear in the form of the Chevrolet Camaro, Pontiac Firebird, AMC Javelin, Plymouth Barracuda, and the first-generation Dodge Challenger.

To make the Mustang affordable it needed to share much of its engineering with an existing Ford product. That product was the smallest Ford of the time, the compact Falcon. In fact, the first Mustangs were built in the same Dearborn, Mich., plant as the Falcon.

Essentially a “parts bin” car, the Mustang was based heavily on familiar yet simple components, many of which were already in production.  Many (if not most) of the interior, chassis, suspension, and drive train components were derived from those used on Ford’s Falcon and Fairlane. This use of common components also shortened the learning curve for assembly and repair workers, while at the same time allowing dealers to pick up the Mustang without having to invest in additional spare parts inventory to support the new model.

The following are excerpts from an interview with Iacocca on the Mustangs 50th anniversary.

“I had a vision of an American-made four-seat sporty car. There were none being produced domestically.”

How did you get the program’s finances to work?

Henry Ford II had just dealt with one of the biggest losses in Ford history with the Edsel. It was dumped just one year earlier at a loss of $250 million. Henry was not receptive to launching a new, unproven line of cars which would present further risk to the company.

“I made a number of trips to his office before I gained approval to build. He told me if it wasn’t a success, it would be my a–, and I might be looking for a new job elsewhere.”

“Henry gave me just $45 million to develop and build the car. That was an unheard of low amount at the time to design and push a new car line through to production. But we did it. In the first 18 months in the marketplace, we sold 1 million cars. It was the best-selling car at Ford since the Model T in the 1920s.”

“They loved it from the start. People were knocking down the doors on introduction day. We sold 22,000 that opening day. Dealers couldn’t stock enough cars to satisfy the demand. Our initial marketing plan worked, and worked well.”

“We gave Detroit something they didn’t have — a four-seat sporty car with European styling. It was 1967 before either GM or Chrysler could get a car on the market to compete with the Mustang. We gave it a hot new V-8 with sports car handling, and introduced it successfully to the race car circuit, where it did well.”

*Bob believes around 600-800 K-code Mustangs were built for ’64½, 3,500 for ’65, and 2,500 for ’66. This is based on familiarity with how many Hi-Po engines were manufactured, how many Hi-Po engines Ford generally produced each month, how many went into Fairlanes and Cobras, and other factors. Bob would love for conclusive numbers to be discovered some day, but until that time…