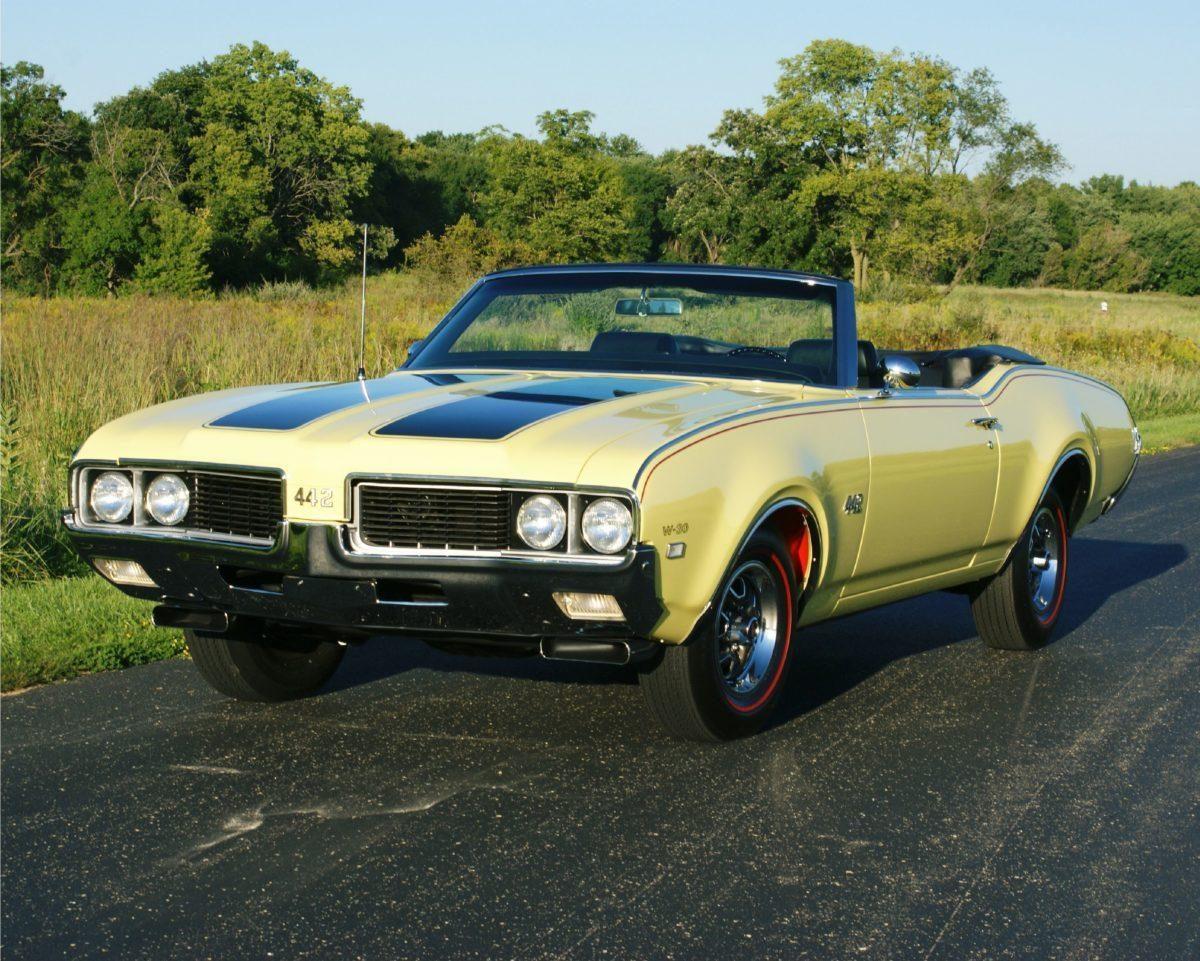 The car on display in Ken’s collection is 1 of 91 built and is the only one finished in Saffron Yellow. Oldsmobile produced 4,296 4-4-2 convertibles in 1969, 121 came with the W-30 upgrade only 91 of which had four-speed transmissions.    With the exception of this car, it is not known how many others are still in existence.

Considered to be undoubtedly one of the finest 4-4-2 examples in the country, Ken became only the fourth owner of this spectacular and rare Oldsmobile when he acquired it from the prestigious Milt Robson collection.   Finished in dazzling Saffron Yellow paint with Black stripes and fitted with a 360 hp, 400 cu. in. V-8 engine with 10.5:1 compression, four-barrel carburetor, four-speed manual transmission, dual exhausts, independent front suspension with A-arms and coil springs with four link and coil springs at the rear, police duty front discs with rear wheel drum brakes, the car is in better than new condition.  Note: When the automatic transmission was introduced as an option the 442 stood for 400 Cu. In. engine, 4bbl carburetor and dual exhaust.

Mr. Kasdorf kept the W-30 for 37 years before selling it to Dave Conway, who oversaw the restoration. The honestly spectacular full frame-off show quality restoration rendered the car to better than showroom condition. Preparation and paint on the chassis are excellent, although the bottom is painted body color instead of the factory black. The cleanliness of the underside suggests the car has been driven only sparingly since the restoration and remains in excellent overall condition inside and out.  Gaps between panels are commendable, with all doors shutting solidly and panel fit excellent throughout. All stainless trim was repaired and polished beautifully, and the fit is very nice. Inside, all pieces were replaced with new components or restored, and the gauges are stunning, while the detailing in the engine compartment is beautiful.

Milt Robson purchased the Oldsmobile in its fully restored condition at the Barrett Jackson auction in 2008. It came with extensive documentation, something Milton required with nearly all of his vehicles, especially those such as this car, given the rarity of its original delivery configuration.

Like most vehicles that regularly appear on enthusiasts’ “Best of” lists, the Oldsmobile 4-4-2 with W-30 package was created and sold to the public in limited numbers to get an ultra-performance engine approved for motorsports competition.

When Pontiac took its Tempest Le Mans-based 394 cu. in. V-8 GTO to market in 1964, the industry hurried to transform other mid-size products into muscle cars. Pontiac’s sister division, Oldsmobile, countered the GTO threat with a mid-year package on its F-85/Cutlass known as the 4-4-2.

By the time this Saffron Yellow four-speed convertible was built in 1969, the 4-4-2 had become its own series. The new W-30 performance option consisted of a Force-Air Engine Induction System that funneled cold air from two massive air intakes tucked under either side of the front bumper through hoses in the wheel wells directly into a sealed air cleaner assembly atop a Rochester four-barrel carburetor (part # 7049254). (GM restricted the use of multiple carburetors in its passenger cars as of 1967.) Oldsmobile called them  “largest factory air scoops in the business.” At over 26 square inches, this claim is likely true.

The engine also used 69.75-cc D-code heads containing 2.072/1.625-inch valves, as well as a special distributor. Just as noteworthy was the W-30's cam profile, which had 328 degrees of duration and .475-inch lift versus that found in the base 400. Combined, the build resulted in 360 official horsepower, though as with most high-output engines of the day, many feel this to be a conservative figure.

Though they can be rebuilt, the D-code cylinder heads are considered the Holy Grail of Oldsmobile engine performance and are both hard to locate and costly to obtain.