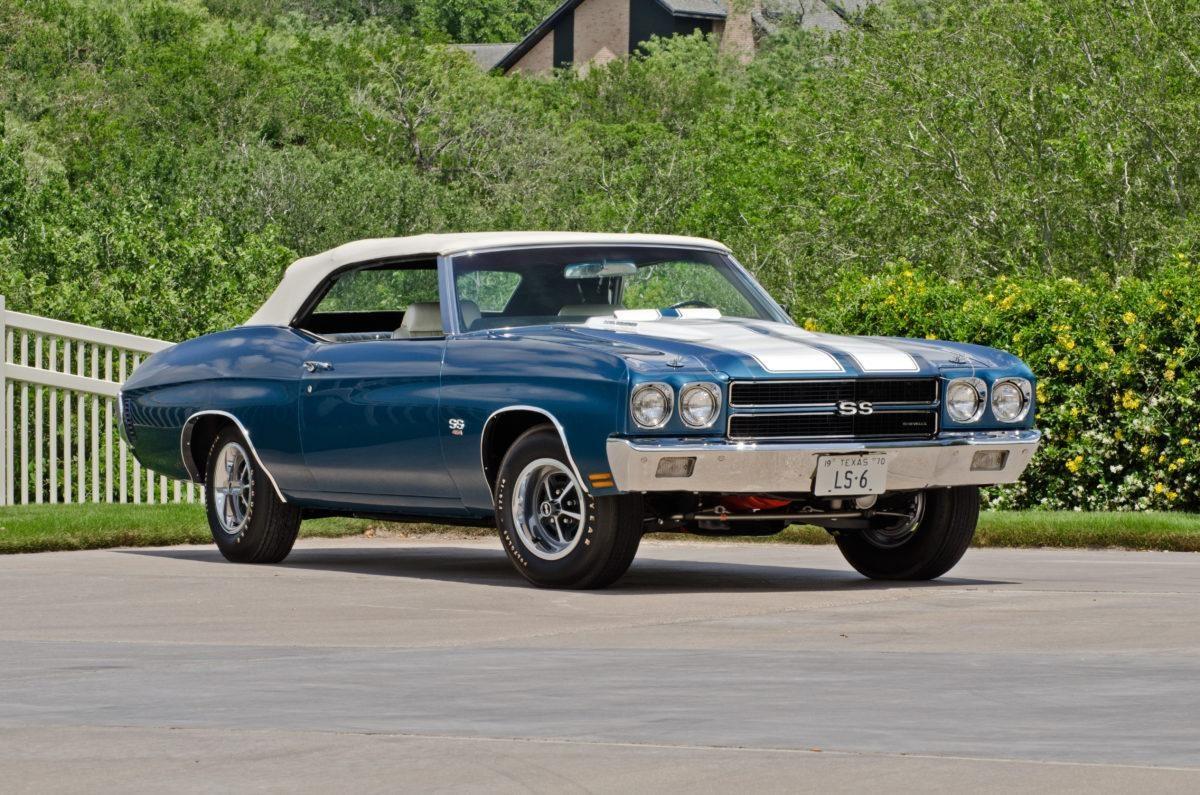 This very rare and historically important LS6 Convertible 454/450 HP, 4-Speed is finished in gleaming Fathom Blue with White SS stripes over the Cowl Induction hood.  The beautifully appointed Ivory interior features bucket seats and a power operated White soft top.  After starting life, the third week of March 1970 at the GM plant in Van Nuys California this stunning LS6 was shipped off to a sleepy little East Texas cattle/cotton railroad town near Shreveport, LA. It sat on the showroom floor at Hullett Chevrolet Company in Waskom Texas (pop. 1,460) for less than two weeks when it was sold to its first owner, James G. Reid of Shreveport.

As luck would have it, it remained in the Shreveport area far from the "rust belt" and harsh winters of a more Northern climate, where it passed thru a succession of owners.  In 2003 it was acquired by noted Texas car collector Buddy Herin.  During the car’s pre-restoration inspection, the factory "build sheet" was discovered on top of the gas tank where it lay hidden from sight for 33 years.  Legend has it that the production workers favorite place for disposing of "build sheets" in the Van Nuys plant was on top of the gas tank.  No one seems to know why!  Exposed to the elements for all those years the paper was in very sad shape, so Buddy had the build sheet subjected to forensic analysis by a document conservator to verify its authenticity.  The car has also been exhaustively researched by Rick Nelson and declared a legitimate SS 454 LS6 by Mark Meekins of the National Chevelle Owners Association, thus ensuring its place in history as one of the few authenticated survivors.

Unfortunately, Chevrolet’s 1970 assembly plant production records are not available.  They were most likely lost or destroyed many years ago.  So, the exact number of LS6 convertibles with 4 speed transmissions can never be known. The numbers frequently seen in various publications are only educated guesses.  It is also impossible to know what the distribution was in terms of transmissions, colors and other combinations of options. It is widely believed (estimated), however that the LS6 454 Cu In engine was installed in about 250 convertibles.  Knowledgeable sources estimate that 60 or so cars are still in existence.  Furthermore, the only way to verify that a car is a real LS6 is to have the original “build sheet”.  Depending on the assembly plant, “build sheets” were frequently found under the carpet, under the back seat, on top of the gas tank and various other locations in the car, if they were left in the car at all.

Never the less, the few that came off the line were the most powerful cars of the day and the last of the breed.  The extraordinary example displayed in the Ken Nagel collection is one of the documented cars.  Photos do not do this car justice.  To fully appreciate the striking beauty and the quality of the restoration it must be seen in person, as it was by may observers when it was awarded concours Gold at the 2018 Muscle Car And Corvette Nationals in Rosemont, IL.

The initial restoration was done by Car Connection in Waco, Texas.  In the summer of 2018, it received a major upgrade by Rick Nelson of Muscle Car Restoration & Design Inc.  Rick spent over two months upgrading over 98 separate items documented with 406 photos.  Reproduction parts were removed and replaced with NOS or difficult to find original reconditioned parts.  With removal of the blower motor, Rick also verified the “hidden VIN number” stamped on firewall. In addition, Rick also conducted a complete and detailed inspection report verifying part numbers etc.  Ogden Top & Trim installed a new top and date correct rear window with assistance from Level One Restoration and Addison Auto Interiors.

The incredibly detailed documentation goes all the way back to the original owner.  A paper trail, consisting of copies of titles, registration records and bills of sale etc., reveals a history of multiple owners who apparently (according to the records) enjoyed every cubic inch of the powerful 454 LS6, which no doubt included some pretty quick trips between small town stop signs.  There was nothing else like it in town.  Cruising the main drag with the top down on summer nights and looking smokin' hot dressed in gleaming blue paint and white racing stripes the car must have screamed, "wanna race”?  When Buddy discovered the car, its condition testified to having been repainted in a different color along with modifications to the mechanicals and exhaust.  The car clearly had been well used and was in dire need of attention.

Enthusiasts read about the arrival of the 450-horsepower 454 in the magazines back in the day. However, they were more concerned with buying this big block in a car they could take to the drag strip and turn those incredible low 13-second times the magazines were wringing out of the LS6 Chevelle. Few people thought about buying a convertible with this high performance engine, setting it up to be one of the most rare and desirable muscle cars of all time. A 1970 Chevelle SS 454 with the LS6 option is extremely collectible and desirable in the two-door hardtop. But, naturally, the convertible is the rare one and the more desirable body style in the collector market.

The '70 Chevelle SS454 LS6 was the largest-displacement and most powerful car built to that time and the enduring champion of the muscle car wars. One of the most impressive combinations of the era, the 1970 Chevelle and the LS6 engine, which the factory underrated at 450 HP & 500 foot-pounds of torque, were a marriage made in muscle car heaven. The LS6 big block engine was packed with all the time-tested horsepower-producing technology, including a forged steel crank in beefy 4-bolt mains, forged steel connecting rods and aluminum pistons, a high lift, high duration solid lifter cam, an 800 CFM Holley 4-barrel on an aluminum dual plane intake manifold and gargantuan intake and exhaust valves in high flow heads.  The Cowl Induction hood allowed it to gulp the huge amount of air needed to feed the beast.

The concept of the "American Muscle Car" was launched in 1949 when the Oldsmobile Division of General Motors installed their new "Rocket 88" high compression, overhead valve engine in the small Olds 76 body.   In 1964 things really took off when John DeLorean found a loop hole in GMs' policy and stuffed a 389 cu in V8 in the mid size Tempest and ignited the horsepower wars. The era peaked in 1970 when the Chevy Chevelle, sporting the most powerful factory production engine ever installed in a car, the legendary LS6 454/450 HP V8, became the apex predator of the day.  The 454 LS6 proved, however, to be the last gasp of the Muscle Car era that was being choked into lifelessness. Car Life magazine wrote: "It's fair to say that the Supercar as we know it may have gone as far as it's going."  Facing a trifecta of troubles in the form of government regulation, fuel shortages and rising insurance premiums, things came to a sudden and screeching halt and the completely irrational classic age of the made in Detroit "muscle car" street racer became American Graffiti.  It would be a long long time until technology caught up with government regulations but engineers kept working on even hotter engines expecting that high performance would someday again have a place in the market and they were right.  But that proved to be a case of too little too late.  Unfortunately, in 1978 GM downsized its intermediate models and the Chevelle name was dropped.